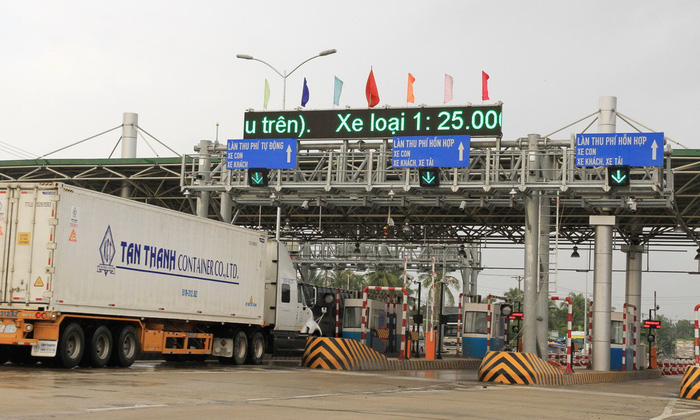 Vietnam is on course to make electronic toll collection (ETC) technology available at all toll stations on its lifeline National Highway 1 by the end of 2018, as stipulated in a government plan.

Radio-frequency identification (RFID) tags are now available on around 480,000 out of Vietnam’s three million cars, with authorities now hoping to tag all cars within this year.

Out of 28 newly installed tollgates nationwide, 17 are already capable of ETC, which eliminates the delay on toll roads by collecting tolls cashless and without requiring cars to stop.

ETC works by scanning the RFID tag on an approaching vehicle and debiting the driver’s account, which must be created and topped up in advance.

The current ETC systems on Vietnam’s roads still require a barrier, which only lifts to allow a vehicle to pass if the driver has enough money in their account to pay for the toll fee.

Drivers with insufficient fund must pay with cash on the spot through a tollgate staffer.

In the future, officials hope to eliminate this bottleneck by introducing barrier-free toll collection, which can be done by linking a driver’s bank account to their toll ETC account.

“The technology is there, but we need the legal grounds and drivers’ support to make it a reality,” said Nguyen Manh Ha, general director of VETC Ltd., which has been appointed the main contractor to develop ETC systems in Vietnam.

According to Ha, barrier-free could become available as early as in 2020.

Ha Xuan Quynh, director of a freight services company based in northern Bac Giang Province, said at a conference held by the Directory of Vietnam Roads on Friday that electronic payment would optimize the company’s efficiency while reducing risks of drivers’ embezzlement.

“With a fleet of 120 semi-trailers, it is also more convenient for us to be billed at the end of each month rather than collecting hundreds of toll receipts from drivers for tax declaration,” Quynh said.