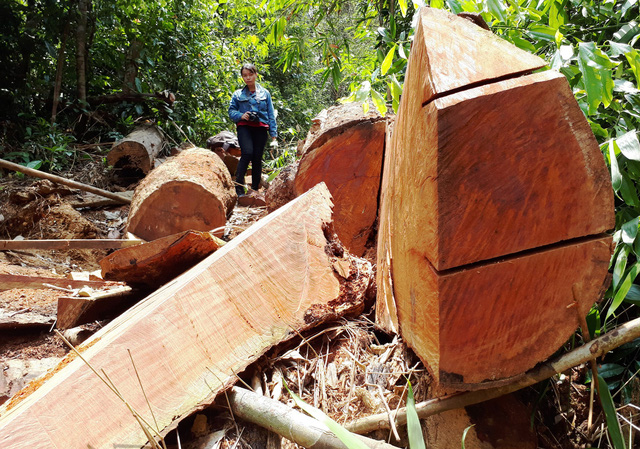 Three large-scale cases of unlawful tree felling were discovered consecutively and their culprits were caught in a south-central Vietnamese province in March, raising general dissatisfaction at local authorities’ forest protection.

On March 7, forest rangers in Nam Giang District, Quang Nam Province, found that more than 33 large trees with a collective volume of over 253 cubic meters had been cut down in one section of the district’s forest.

The logging predominantly involved erythrophleum fordii, a valuable timber tree endemic to several Asian regions, including in Vietnam, but under threat due to overexploitation.

At the scene many trees were seen still lying, most measuring one to two meters in diameter, and some remaining uncut.

While traces of sawing were fresh, and the sap felt wet on a number of stumps, the other bottom parts showed old cutting signs, which suggested that this part of the forest had been damaged for a long time.

Water buffaloes were used to drag the wood away down a steep hillside.

The illegal loggers have been prosecuted.

On March 8, police caught Vu Van Trung, 36, and Vu Van Cung, 40 – two local men in Dong Giang District, to the north of Nam Giang, while they were cutting trees in its protection forest.

Thirty-three sizeable trees with a total volume of 45 cubic meters had been downed at the time, mostly belonging to the pine variety.

With three other men subsequently arrested, the five are expected to stand trial.

In the last episode on March 15, scores of policemen in Nam Giang launched a sunset raid on the hut where six illegal loggers from a neighboring district were sleeping.

Around the shelter were logs partly from erythrophleum fordii, totaling around 30 cubic meters in volume, and three cubic meters of wood was hidden in a nearby lake.

The leader of the crime group turned himself in to the police later in the day and admitted the wrongdoing.

An investigation into what officials are responsible for the incidents is under way.

Here are some pictures about devastation in Nam Giang District, Quang Nam Province: