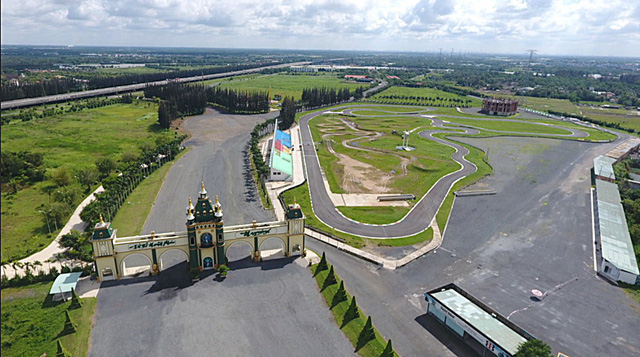 Authorities in the southern Vietnamese province of Long An have blown the whistle on the debt-ridden developer of the massive theme park Happyland for selling many land plots within the project despite a distraint order imposed last year.

The provincial Department of Construction has made a report of multiple violations of Phu An Investment, Construction, and Infrastructure Development JSC, under the management of Khang Thong Group.

Phu An was given a distraint order upon the Happyland entertainment complex project, located in Ben Luc District, Long An Province, in August 2017.

The construction of Happyland was first initiated in 2011, with Phu An Company announcing that it would be Southeast Asia’s largest entertainment complex upon completion in 2014. The original investment was estimated at US$2.2 billion.

Covering a total of 350ha, the park stretches 3.7 kilometers along the Vam Co Tay River, expected to include a variety of features, namely a hot air balloon, a wine castle, Vietnamese-themed villages, studios, an ancient town, a toy city, and a five-star hotel.

However, Happyland has never been opened to visitors, while many facilities are nowhere near completion.

Despite the distraint order, Phu An had arbitrarily transferred the use of 27.4 hectares of land to Hanoi-based RRP Vietnam JSC in late March, with the transactions costing up to VND959.7 billion ($42.2 million).

An investigation later revealed that the firm had handed over some 25 land plots within the project to Cao Thi Hao, who resides in Ho Chi Minh City, in early November 2017.

In October of the same year, Phan Thi Phuong Thao, chairwoman of the management board of Phu An, also signed an agreement worth VND46 billion ($2 million) to sell games, transfer technology, and pay damages to Ho Chi Minh City-based Tho Trang Entertainment Investment JSC.

Both Hao and leaders of Tho Trang Company asserted they were not aware that Phu An had not been allowed to carry out such transactions due to the distraint order.

A probe by Tuoi Tre (Youth) newspaper also showed that a 31 hectare piece of land within Happyland is listed in three different mortgage contracts, which has made it hard to execute the distraint.

Accordingly, Phu An signed a deal with a bank branch in Long An Province on December 29, 2011 to become the guarantor for a man named Phan Dac Tue to borrow VND275 billion ($12.1 million).

Another contract was also inked the same day, allowing Phu An to be the guarantor for another man named Pham Van Kiet to take out a similar loan.

The land plot is also part of an 86 hectare land area that Phu An mortgaged at an Agribank branch in 2007.

The firm is now facing a massive fine for its serious offenses.