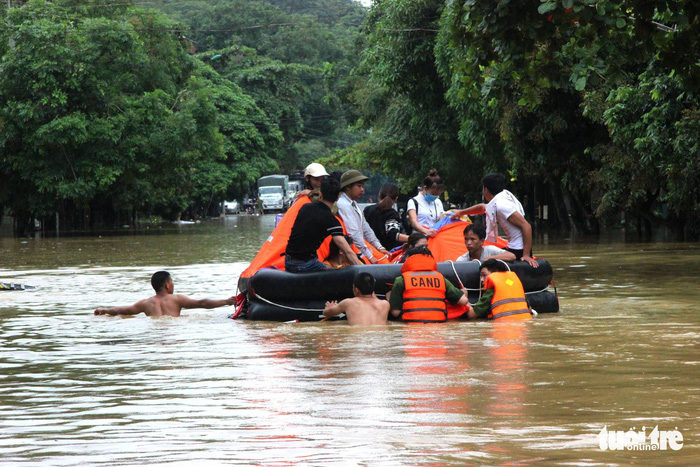 At least five people have been killed and eight others missing as serious floods and landslides hit the northern Vietnamese provinces of Lai Chau and Ha Giang over the weekend.

In Lai Chau Province, three people have died, eight gone missing, and five others injured by landslide as of Monday morning, according to the provincial steering committee for disaster prevention.

Strong current along Nam Thi Stream in the northern province of Lai Chau.

Floods have washed away some 33 houses, nearly 300 hectares of paddy field, and multiple fish farms in the province, with financial damage estimated at billions of dong (VND1 billion = US$44,000).

Traffic was also blocked at multiple locations across the locality due to landslides.

Meanwhile, in Ha Giang Province, two people in a family were killed after their house collapsed on Sunday.

A total of 25 homes in Ha Giang have given way, while about 500 others were severely inundated, forcing local residents to travel around by boats.

According to Nguyen Duc Vinh, deputy head of the provincial steering committee for disaster prevention, people in high-risk districts have been evacuated to a safer zone.

Specialized units have also been dispatched to dangerous locations to ensure safety for locals, Vinh added.

He also extended his condolences to the families of the deceased and injured victims.

Torrential rain accompanied by strong winds has been expected to continue hitting the region from June 25 to 27 and mainly occur on the morning and at night, the National Center for Hydro-meteorological Forecasting reported.

There will also be high risks of landslides and flashfloods across mountainous provinces, the center added.