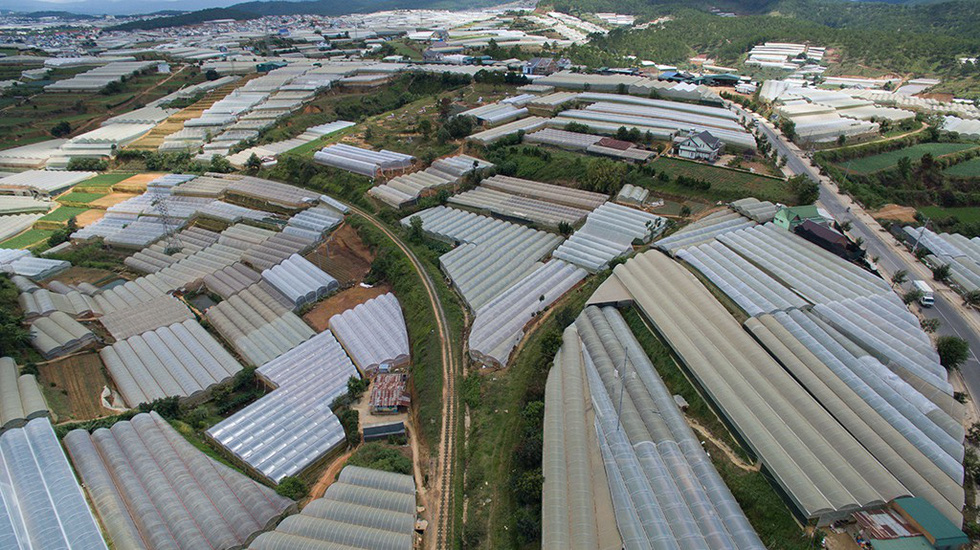 Once favored by holidaymakers in tropical Vietnam for its year-round temperate climate, Da Lat, the capital of the Central Highlands province of Lam Dong, is now warming at alarming rates due to the mushrooming of agricultural greenhouses on its outskirts and in nearby areas.

The number of greenhouses in Da Lat and neighboring farming regions has grown by five times over the past five years, according to Dr. Vu Ngoc Long, former president of the South Institute of Ecology.

Official reports put the total area of greenhouses in Da Lat and its proximity to around 5,600 hectares, but Dr. Long believes the actual number can be much higher.

By the year 2020, Lam Dong looks to have over 17,500 hectares of ‘hi-tech’ farming land, meaning even more greenhouses will be built to realize this vision.

“The statistics paint a gloomy picture of [the greenhouses’] impacts on Da Lat’s environment and landscape,” he said.

“If you compare satellite photos of Da Lat in the old days and now, you would see green spaces being gradually replaced by vast swaths of white, the color of greenhouses.

“The local agricultural industry is being dominated by greenhouses.”

Greenhouses, despite their benefits, can have three major adverse effects on the environment -- raising air temperatures, reducing soil quality, and polluting the water system of an area, Dr. Long says.

“The high density of greenhouses in Da Lat allows no room for ventilation, which leads to the build-up of hot air,” he explained

The increase in outdoor temperature gives rise to a need for cooling systems inside the greenhouses, which emit hot air and other pollutants into the environment, worsening the situation.

“The entire thing is a vicious cycle that only gets worse day by day,” Long said.

According to the ecologist, the outskirts of Da Lat used to function as the city’s ‘air conditioner' that keeps its weather temperate throughout the year.

As greenhouses begin to occupy this crucial space, coupled with increased construction in the city center, Da Lat is unsurprisingly getting warmer and warmer, he said.

Readings show that the average yearly temperature in the Central Highlands city has climbed by 1-1.5 degrees Celsius over the past ten years.

In areas with large numbers of greenhouses, this spike is even more noticeable, at around 3-5 degrees Celsius.

Destruction of hillside forests to build greenhouses has also led to the degradation of soil quality, which is why there have been increased reports of landslides in the areas in recent years, Dr. Long explained.

According to Dr. Vu Ngoc Long, the definition of hi-tech agriculture has not been fully understood by both policymakers and farmers in Vietnam.

“The application of modern technology in farming is not all about greenhouses,” he said.

“In fact, greenhouses are only a last resort when there is a need to grow crops in extreme weather conditions, while Da Lat’s climate is already ideal for growing greens and flowers.”

According to Dr. Long, there is no reason to build greenhouses in Da Lat when they can be built basically anywhere else and still yield the same result, as the temperature inside such buildings can be monitored and adjusted.

In European countries and the U.S., greenhouses are only constructed in locations where conservation is not as important as food production, he added.