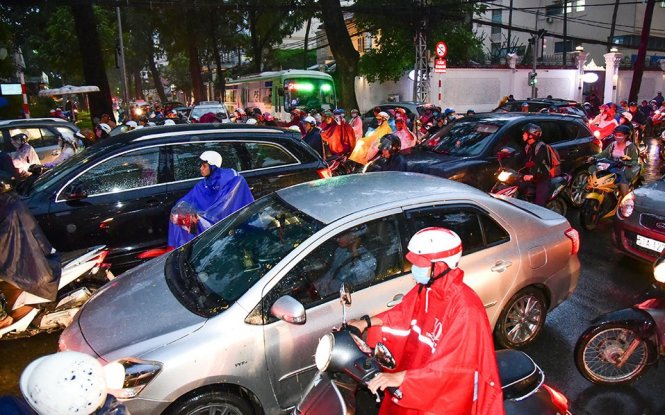 The Ho Chi Minh City Department of Transport is planning to pilot a bus-only lane along some local streets, while experts fear that such a route would worsen congestion in the southern metropolis.

The municipal transport department is coordinating with the traffic engineering faculty of the Ho Chi Minh City University of Transport to establish a detailed plan.

The faculty has suggested that the bus lane be piloted along sections of Vo Thi Sau and Dien Bien Phu Streets, which are both one-way roads.

There are currently three options for the arrangement of the bus lane on the streets.

The first suggestion is that the bus lane would be 3.25 meters wide and be placed on the right side of the roadway.

In the second option, the new lane, also 3.25 meters wide, would be added to the middle of the roadway.

The third suggested that the bus lane should be 6.5 meters wide, allowing two buses to travel at a time, and be placed on the right side of the roadway.

The bus lane would be separated from other lanes by a median strip.

Vehicles of police and military units, as well as fire trucks and ambulances, can also travel in the lane.

During other hours and weekends, other vehicles such as cars and motorbikes will be allowed to travel in the bus lane.

Both roads are often susceptible to traffic congestion during rush hours.

According to Vo Kim Cuong, former chief architect of the southern metropolis, a bus-only lane is necessary to improve the service quality and convenience of the type of public transport, thus attracting more passengers.

The plan, however, may not be viable given the insufficient space along the streets in the city, Cuong said.

The new lane may occupy up to one-third of the roadway, leaving less room for automobiles and motorbikes, which will lead to more severe gridlock, he elaborated.

Another expert, Luong Hoai Nam, assessed that the bus lane should not be piloted on such busy streets as Dien Bien Phu and Vo Thi Sau.

If congestion becomes too serious, commuters will possibly infringe on the bus lane, Nam elaborated.

He believed that the bus lane alone would not be enough to ease traffic jams in the metropolis.

Only a modern bus system with hundreds of routes and thousands of stops may bring about considerable changes, he added.