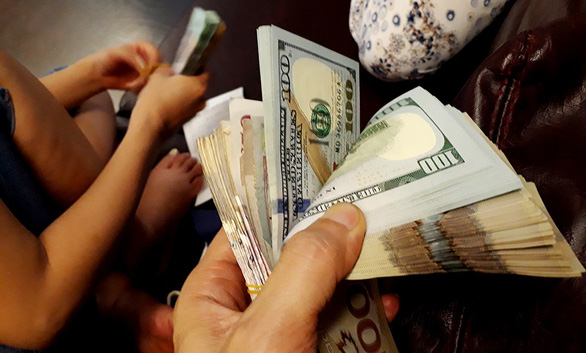 Authorities in Can Tho City in southern Vietnam have spared a local resident from paying a civil penalty of VND90 million (US$3,850) for exchanging a dollar bill into Vietnamese currency at a local gold shop.

Nguyen Ca Re, 38, was caught converting a 100-dollar bill into VND2.26 million in cash at a gold shop in downtown Can Tho in January.

The place was not licensed to offer currency exchange service.

Re was fined VND90 million for “buying or selling foreign currency at an unlicensed establishment,” while the shop owner was subject to a heftier fine of VND180 million ($7,700) for “offering currency exchange service without a license.”

These fines were issued in September, more than seven months after the incident.

During a raid in January, the gold shop owner also had many diamonds and gemstones at the establishment confiscated as he failed to prove their origin.

Re has sent a letter to Can Tho authorities asking to be exempt from paying the fine, citing his financial challenges.

He works as an electrician, and claims the dollar bill he was caught trying to cash out was a gift from a friend.

A working delegation led by Can Tho deputy chairman Truong Quang Hoai Nam paid a visit to Re’s house on Monday for a talk with the man and reviewing his request.

After the meeting, Nam said he would direct relevant agencies to take necessary steps to exempt Re from the penalty.

Regarding the confiscation of diamonds and gemstones from the gold shop, Nam said more time is needed to review the case, referring to the 20 diamonds and 19,910 artificial gemstones police officers seized from the jewelry shop for lack of proof of purchase.

Shop owner Le Hong Luc has filed a formal complaint against the impounding and demanded that his properties be returned.

“An official report on the seizure is expected to be made available to me in the next few days,” Nam said on Monday.

“[After receiving the report] I will directly review the complaint filed by Le Hong Luc,” he added.

According to current regulations in Vietnam, foreign currencies can only be traded legally at banks or licensed counters.