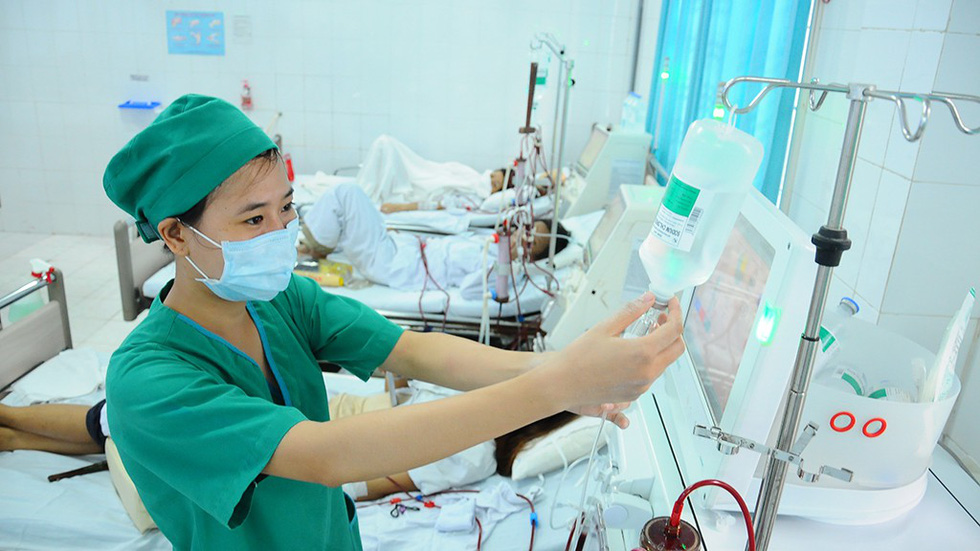 A group of doctors from Cho Ray Hospital in Ho Chi Minh City has announced a breakthrough research that opens up an opportunity for people with kidney failure to increase their chances of living and lengthen their lifespan.

Tran Thi Bich Huong, a senior doctor and former head of the nephrology department at the infirmary, and her associates has spent the past four years studying the cause and treatment of rapidly progressive renal failure (RPRF), which is considered a rare disease.

According to Dr. Huong, focuses are often directed to acute and chronic renal failure, while RPRF is usually forgotten.

Huong was first interested in the topic when she met a young male patient with lupus nephritis in 2010. She was able to save his life, but not his kidneys.

In 2012, the doctor started a project on diagnosing and restoring kidney functions for patients with RPRF.

She was permitted to conduct kidney biopsy on 14 patients who were undergoing dialysis at the hospital.

All of the patients had their kidney functions recovered without any complication following Huong’s treatment.

The doctor discovered that kidneys of many patients can still be ‘alive’ and can be saved even if they have to receive dialysis.

Dialysis, or renal replacement therapy, is used when patients enter a severe stage of the disease and their kidneys are believed to be ‘dead.’

Huong then gathered her colleagues to begin their research in 2014, in the hope of helping as many people with kidney failure as they can, especially those suffering RPRF.

Thanks to the findings of the study, Huong and her team have been able to save 90 percent of people with serious renal failure from having to undergo dialysis.

About 60 percent of those who have been treated with the renal replacement therapy for at least three months no longer need to be through the process.

“Not only did we help these patients save their money, we also helped them extend their lifespan and escape the ‘death sentence,’ as dialysis can lower their life expectancy by 30 years,” Huong elaborated.

The research also revealed that many of the RPRF patients are also diagnosed with thrombosis, which is the formation of a blood clot inside a blood vessel.

The condition often occurs to young people from 25 to 35 years old and is 90 percent fatal if not treated properly, the medical practitioner stated.

Doctors previously treated this group of patients with approaches that were not effective and sufficient, as they focused only on one of the two diseases, either RPRF or thrombosis, which lowers their chance of recovery.

The best method is to treat both illnesses at the same time with plasmapheresis, immunosuppressant drugs, anticoagulation, and dialysis if necessary within at least a year, Huong stated.

Huong and her research group are still receiving RPRF patients to treat them with their method.

People with the disease are expected to recover within two years before being able to resume their study, job and have children.

H.T.T.X., a young Ho Chi Minh City woman, was diagnosed with the disease, along with heart failure, pneumonia, epileptic seizure, and Thalassemia, which are all very dangerous.

“Doctors said my chance of living was only one percent. I thought it would be easier if I could just die,” X. said.

Thanks to Dr. Huong, the patient’s health has recovered by 60 percent so far. She no longer needs cardiac medications and will be able to stop receiving dialysis in the near future.

The woman has also gained eight kilograms and looks much livelier.

“Dr. Huong is like a mother to me. She gave me another chance to live,” X. said.

On November 25, Dr. Huong and her team were honored with an award in the Creative Ideas for Applied Science category with their research at the 16th annual KOVA Prize in Hanoi.