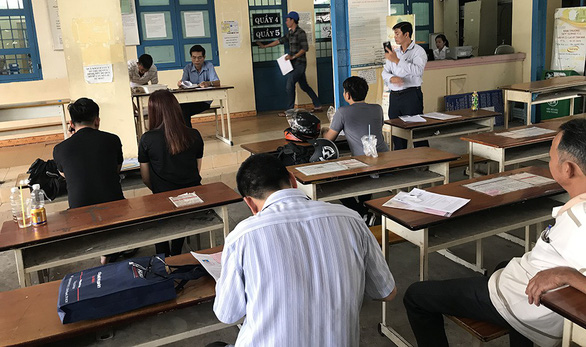 Commercial drivers who are responsible for serious traffic accidents should have their driver’s license permanently revoked, Vietnamese Transport Minister Nguyen Van The proposed on Friday.

Minister The made the proposal at a conference in Hanoi to announce the ministry’s working agenda for 2019.

While the number of traffic accidents in Vietnam in 2018 dropped by five percent compared to 2017, the top causes of crash remained violation of traffic laws, including the use of alcohol, drugs and other intoxicants while driving, The said.

Multiple fatal accidents that resulted from driving under the influence have angered public opinion in recent months, The said.

On January 2, a Ho Chi Minh City-bound tractor trailer in the southern province of Long An crashed into more than 20 motorcyclists stopped at a traffic light, claiming four lives.

The truck driver later tested positive to heroin and alcohol use.

One day earlier, three people died as a taxi overturned after hitting a motorcycle in an apparent case of driving under the influence in the Central Highlands province of Lam Dong on New Year’s Day.

“To prevent such accidents from happening in the future, there needs to be regulations that hold owners of transport companies accountable for their drivers’ violations,” Minister The said.

“I propose that a permanent revocation of driver’s license be put in place,” he added.

Currently, driver’s licenses in Vietnam can only be revoked for a maximum period of six months, pursuant to a 2016 government decree.

Meanwhile, the license to work as a commercial driver has a maximum revocation period of 24 months, according to a 2014 law on administrative violations.

Both of these documents will have to be revised if the transport ministry wants to go through with Minister The’s proposal, according to Nguyen Van Quyen, chairman of Vietnam Automobile Transport Association.

“The plus side of this proposed regulation is that it will encourage drivers to be more responsible in obeying the law, which brings safety to themselves and everyone else,” Quyen said.

Vietnamese driver’s licenses have a validation period of ten years for vehicles with nine seats or less or a weight load of 3.5 metric tons or less, and five years for bigger vehicles.

Tran Son, former deputy chief of the law guidance and traffic accident investigation department under the Ministry of Public Security, said the current limit on license revocation period is too lax to have an impact on drivers’ awareness.

“There is already a revision underway for the 2008 Law on Road Traffic, so we should put this proposed regulation on permanently revoking driver’s license into consideration,” Son said.

“It would be best if the regulation is introduced by 2020,” he added.