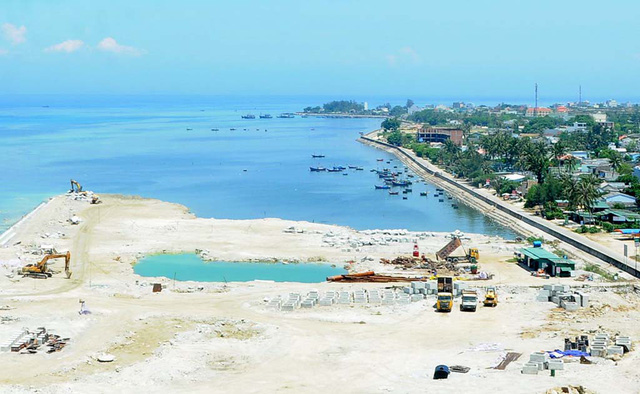 Concerns are swirling around a firm’s suggestion to develop a sweeping commercial complex, most of which will be built through land reclamation, on an area which Vietnam expects to seek the UNESCO global geopark status for in the central province of Quang Ngai.

Vietnam’s newly-founded Ly Son JSC has proposed building a coastal commercial and service complex called The Sea Eyes that covers 54.7 hectares – just over the size of 76 football pitches – on and around the province’s Ly Son Island.

The proposed VND1.7 trillion ($73.7 million) project will run 2.5 kilometers along the island’s southwest coast, according to a document obtained by Tuoi Tre (Youth) newspaper.

But what raises eyebrows is that the company says around 93 percent of the project will be on land reclaimed from the waters off the island, which is famous for its coral reefs.

Ly Son is administratively a district of Quang Ngai.

The provincial administration has not given a green light for the proposal and has tasked relevant agencies with figuring out strategies in response to climate change and rising sea level before the complex may be approved.

In the meantime, the Party Committee of Ly Son District said the plan’s possible effects on the marine ecosystem and national defense should also be taken into account.

Nguyen Quoc Viet, chairman of Ly Son District, admitted that local residents had been solicited for their views on the project and most were worried about its possible threats to their livelihood.

“Locals rely on the waters surrounding Ly Son as their fishing ground,” he explained.

Another problem, Viet said, is that a local cultural tradition may also be greatly affected as the space the complex may occupy has long been used for a boat racing festival.

The proposed complex sits completely in the Ly Son-Sa Huynh area that Vietnam hopes will get recognition from UNESCO as a global geopark by July 2020, said Nguyen Minh Tri, director of the provincial culture and tourism department.

UNESCO conducted a field evaluation in the area last year.

“Construction work harmful to the aquatic life and seascape here is guaranteed to affect the assessment result,” Tri said.

“As sustainable development is the prime purpose of a geopark, merely projects that do not cause too much disturbance to the under-protection geological heritage are encouraged.”