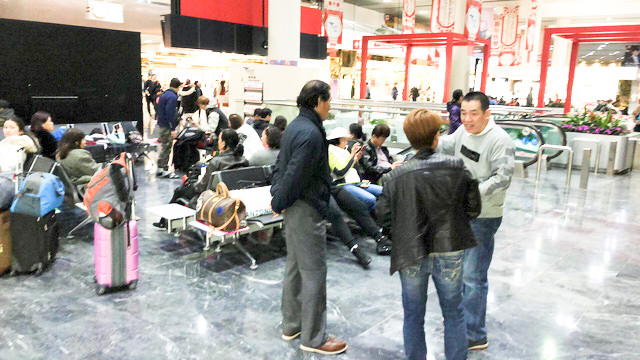 A number of Vietnamese passengers of American Airlines have got stranded in Macau and Hong Kong transit airports collectively for two days while awaiting an arrangement between the airline and its counterparts.

One of the flyers, Nguyen Manh Nghia, told Tuoi Tre (Youth) newspaper on Saturday night that the AA125 flight that left Texas, where the largest hub of American Airlines is situated, was scheduled to arrive at Hong Kong International Airport as a stopover at 5:35 pm on January 17 before traveling to Ho Chi Minh City.

But the major United States airline’s plane failed to land in Hong Kong due to fog after a 17-hour-long flight from Texas’ Dallas and instead had to touch down at Macau International Airport, about 61 kilometers away as the crow flies.

The rerouting caused at least 70 Vietnamese flyers on the flight (some estimates put the number at 130) to stay overnight at the Macau airport from 6:00 pm on January 17 to 2:00 pm the following day, Nghia said.

This happened although a number of solutions were proposed to bring the passengers back to Hong Kong on time for a flight to Vietnam, the passenger said.

Having no transit visas for Macau, most of the affected passengers stayed in the plane multiple hours straight before being able to get through airport security, Nghia added.

Over 70 affected flyers, also because of carrying no such visas, could not use hotel services arranged by American Airlines, according to a worker at the Macau airport.

The passengers would receive meal tickets but no cushions and blankets as the flight crew had gone to a hotel for a rest and the airport was unavailable, the worker added.

A representative from the airline’s customer care division said it had no information about the next flight and asked the passengers to contact its staff in person.

After spending a night in Macau, the Vietnamese passengers were transported to the originally intended stopover, the Hong Kong International Airport, where they were told to board a plane to neighboring Taiwan to go home.

But only some of them were carried as planned, while the others had to wait in Hong Kong.

And these people might stay there until Sunday morning, passenger Nghia said.

American Airlines said as the Vietnamese passenger group was divided, some fliers were expected to land at airports near Ho Chi Minh City’s Tan Son Nhat International Airport, their ultimate destination, such as those in the Vietnamese central metropolis of Da Nang and Cambodia.

This was because airline had yet to make an arrangement, the American transport service company explained.

One of the passengers in Hong Kong, Hong Hoa, said many of her fellow flyers had ‘suffered a lot,’ especially women taking care of their babies.

They had used up all the diapers but knew no way to buy more, she said.

Another passenger, Ngoc Dieu, said the customers were handed HK$90 (US$11.5) each to cover their meal cost but many chipped in to purchase more delicious food sold at over HK$100 ($13).

Many of the passengers said they required American Airlines to give an explanation, clearer information and better meal and accommodation services, given the wait by around 100 customers.