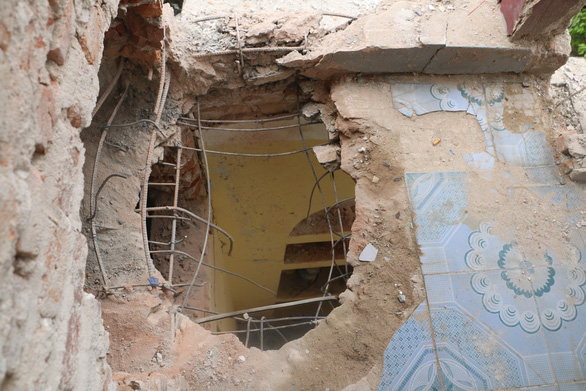 Police in northern Vietnam announced Wednesday they have commenced legal proceedings against a local man who partially destroyed his older brother’s house in a pre-meditated attack.

The police report states that a blast occurred at the house of Xo’s biological brother, Nguyen Huy Lien, just after 2:00 am on February 9.

Lien and his two grandchildren were wounded in the attack but the others inside the house, including three adults and three young children, were untouched.

The blast blew out a large section of wall supporting the two-story building, destroyed furniture, and caused severe damage to a neighboring house.

Working off a list of more than 100 suspects, law enforcement officials eventually narrowed down the list to Xo, a man they say has been feuding with his brother for many years.

Police also noted that Xo had fled his home shortly before the blast and changed his phone number immediately after.

Xo was found by police and eventually confessed that a bitter disagreement with Lien and one of his grandchildren motivated him to carry out the attack.

It is still unclear exactly what the disagreement was.

According to Xo’s statement, he first began planning the attack in October last year and purchased two kilograms of explosives, a 1.5-meter-long slow burning fuse, and two detonators the following month.

He originally had hoped to set off the bomb on February 2 but chose to delay because a number of people had gathered at the house for a family reunion.

Five days later he rigged the home-made device on the second story of the house, burned the fuse, and rushed down a ladder to escape the blast.

He hid in various rental spaces until police finally found him on February 17, a little more than week after the blast, while he was boarding a fishing boat in Thanh Hoa’s neighboring province of Nghe An.