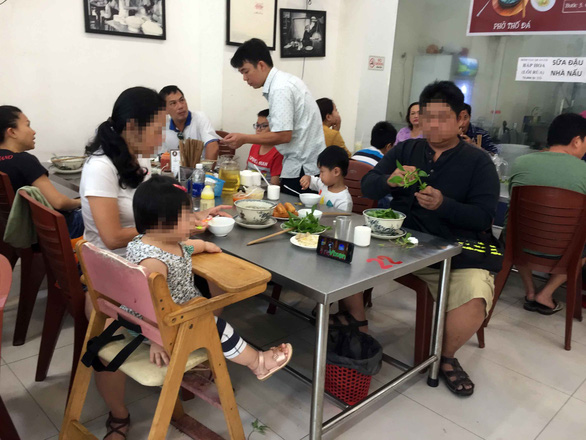 A French psychologist has explained the consequences of allowing children to keep their eyes glued to screens while eating, warning against the long term health impacts of the growing trend.

Scan the dining room of any restaurant in Vietnam and you’ll notice they all have at least one thing in common: most children in the room are locked into a staring contest with a smartphone or tablet.

Parents throughout the country have chosen to trade in discipline for cartoons, movies, and mind-numbing mobile games in order to keep children in their seats at restaurants, and experts say this is causing considerable damage to the mental development of Vietnam’s youth.

T., a preschooler in Ho Chi Minh City, is one of literally millions of children in Vietnam whose development has been stunted by screen time.

During meals, T.’s grandmother takes the path of least resistance in getting the young boy to eat - simply plopping him down in front of the television and using it as a distraction to shovel food into his mouth.

If T. gets bored or throws a tantrum, she switches the channel and keeps on feeding.

While the grandmother sees it as a way to keep the boy well fed, experts say such practices lead to a dependency on screens and serious health issues.

Children like T. become conditioned to only eat in the shadow of colorful cartoons while parents are happy to have their kid sit still for a few minutes.

In a recent interview with Tuoi Tre (Youth) newspaper, French psychology expert Wilfried Gontran, a psychology lecturer at the University of Toulouse-Jean Jaurès in Toulouse, France, said he is terrified of the long term issues consequences of giving Vietnamese children so much screen time.

Gontran, who also teaches at the University of Social Sciences and Humanities – Vietnam National University Hanoi, recently spoke to a group of parents and children at a seminar titled “Young People and the Virtual – Fascination for the Screens” in the Vietnamese capital, where he discussed the impact that technology, such as smart phones, tablets, and televisions, has on children and the extent to which it should be limited.

Children under three years old are extremely attracted by colorful images and giving them so much exposure to these images at such a young stage of development creates an inevitable attachment that continues into their adolescence,  explained the French expert.

Gontran added that these parents are just “lulling children to sleep” instead of properly feeding them.

The French psychologist, who also is member of the Association for the Development of Education and Psychology in Southeast Asia (ADEPASE), also noted that children aged 0 to five who interact with mobile devices at early ages, face more mental and psychological problems than those who first begin to interact with such devices after the age of ten.

Some of the negative effects that extended screen time can have on children include passing on opportunities to interact with other, passivity, and avoiding dealing with uncomfortable real-world situations.

The Vietnamese expert said many studies have proven a link between watching television during meals can lead to obesity and lead to health conditions such as type 2 diabetes, high blood pressure, and heart disease.

Other problems brought on by mixing screens with meals include language and speaking disorders, aggressiveness, lack of concentration, and a lack of critical thinking skills.

According to Gontran, parents who claim that technology serves as a ‘babysitter’ while they are busy are only hindering their child’s development.

He also stressed that technology is a vital aspect of modern society and that, rather than banning children from these devices completely, time should be limited.

“Most importantly, during the time parents are preventing children from using smart phones, tablets, and televisions, parents need to redirect their children to other things or shape their interest so that the children will start going out to the world,” Gontran said.

“You can go with your child for a walk, have some fun, and maybe even have a bit of a quarrel with the child.  Don’t forget that children really like ‘quarrels’,” he joked.