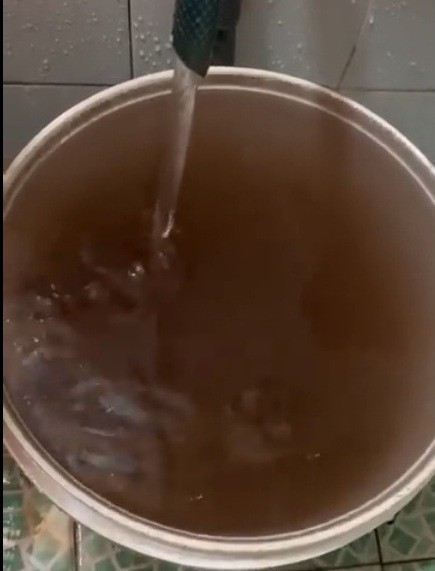 Residents in Da Nang have been upset after their tap water turned brown and murky, at a time when the central Vietnamese hub is battling against an extreme heatwave.

The situation occurred on Saturday night and Sunday morning, troubling citizens as they tried to cope with the scorching weather.

Temperature reached 40 degrees Celsius on Saturday, the National Center for Hydro-metrological Forecasting reported, adding that the heatwave will linger until the end of Monday.

According to T., who lives in Thanh Khe District, his family has been unable to use tap water due to this problem.

Another resident in Thanh Khe said he had to open the faucet for a while until the color was back to normal.

Many people have reported similar problems to the Facebook page of the Da Nang Urban Management Unit.

A representative of the Da Nang Water Company (Dawaco) confirmed on Sunday that the firm had cut water supply from 1:00 pm to 5:00 pm on Saturday to connect the pipelines at one of its plants.

The schedule had been announced in advance, the representative claimed.

After the supply was resumed, the water carried along the dregs and rust inside the pipelines, which led to the change in color, he elaborated.

It also took some time for the water supply to be fully restored, resulting in slow water flow in some neighborhoods.

The firm will figure out suitable compensation and make an announcement when they reach a conclusion, the representative stated.