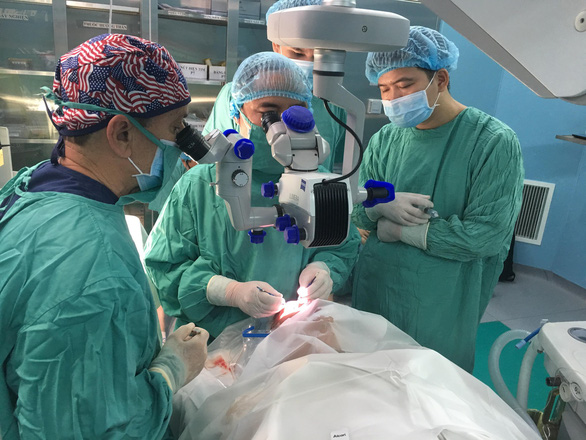 Doctors at a hospital in the central Vietnamese province of Thua Thien-Hue have successfully carried out corneal transplant for five local patients, using corneas gifted by American donors who have recently passed away.

The surgeries were performed at the Hue Central Hospital - Base 2, located in the provincial capital city of Hue, Dr. Pham Nhu Hiep, director of the infirmary confirmed on Monday.

All of the five patients are residents in the province, whose eyes had been severely damaged, Hiep stated, adding that they were given partial financial assistance for the operations.

The surgeries were carried out shortly after the hospital on Sunday received five pairs of corneas from Dr. Edward Charles Kondrot, an American ophthalmologist and member of the Hawaii Ophthalmology Society and the Surgical Eye Expeditions International.

The corneas were donated by U.S. citizens who passed away in May.

Based in California, the Surgical Eye Expeditions International, or SEE International, is a nonprofit humanitarian organization aimed at providing sight-restoring operations in communities that are overwhelmed with the large number of blind individuals who cannot afford surgery.

Dr. Kondrot and his wife, Ly Kondrot, are active volunteers themselves. The couple has traveled to many countries to perform eye surgeries and corneal transplantation for free.

According to the U.S. ophthalmologist, he has to make a proposal to an eye bank in his country in order to be granted the donated corneas, along with necessary documents.

Kondrot said he often receives two to three corneas, but the eye bank gave him ten this time.

The eye bank believed that Vietnam is in need of a lot of corneas for transplant surgeries, the doctor said.

Dr. Hiep affirmed that corneal transplant is in demand in Vietnam, while the number of donors is rather small.

The cost for each procedure is up to hundreds of millions of dong, which may be unaffordable for many patients. (VND100 million = US$4,300)