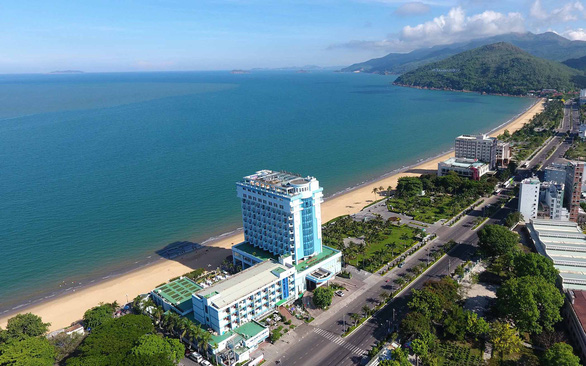 In a praiseworthy effort to restore the natural beauty of its coastline and reserve public areas for the people, the administration of Binh Dinh Province in south-central Vietnam is poised to relocate three major seaside hotels that block the view of a popular beach.

The three hotels up for relocation – Hai Au, Hoang Yen and Binh Duong – are located on An Duong Vuong Street in the provincial capital of Quy Nhon.

“Clearing land in this core section of Quy Nhon’s urban area will be extremely challenging and costly,” said Binh Dinh chairman Ho Quoc Dung at a voters’ meeting in Quy Nhon on Monday.

“However, provincial leaders resolve to follow through with this plan to safeguard the unique beauty of Quy Nhon’s beach,” he told voters.

According to Dung, the relocation of all view-blocking buildings away from Quy Nhon’s coast has been mulled over for years and was recently added to the city’s urban planning.

“The coastline provides the base for Quy Nhon’s entire urban space,” Dung said.

“The beach and coastal area belong to the community, and we should not repeat the mistake of crowding them with buildings and structures as some other coastal cities have done,” he added.

The two-star Binh Duong Hotel will be first to undergo demolition, as agreed by the provincial administration and Vietnam’s defense ministry.

Final steps to inventory and evaluate the hotel’s assets are being done to determine the amount of compensation its owner will receive from the site clearance.

“Clearance of the other two hotels, Hai Au and Hoang Yen, will depend on the expiration of their respective land lease contracts,” Dung said.

This is not the first time Binh Dinh has taken a bold move to improve its capital’s landscape.

Previously, 3,000 households in Quy Nhon was relocated for an ambitious project to build four new lanes for its iconic Xuan Dieu Street, which runs along the famous coastline, completed in late 2018.

The province plans to set aside another VND280 billion (US$12 million) this year to transform the old street into a pedestrian walkway that doubles as a coastal park.

More roads leading up to Quy Nhon’s coastline will be constructed in the foreseeable future, Dung said.