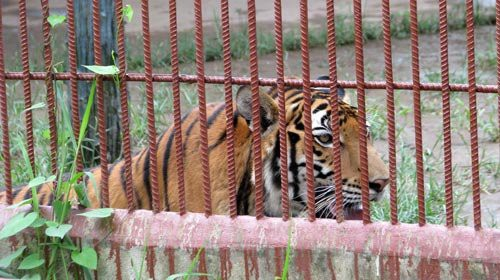 A local man who had his arms bitten off by a tiger in the southern Vietnamese province of Binh Duong earlier this week is no longer in critical condition, following intensive medical treatment administered by doctors at a hospital in Ho Chi Minh City.

Vo Thanh Quoi, 49, from the Mekong Delta province of An Giang, is still under the close supervision of doctors at Cho Ray Hospital in District 5, but he is expected to eventually recover from the attack.

Quoi lost his entire right arm and his left forearm while being attacked by a tiger at the Binh Duong-based Thanh Canh ecotourism site on Tuesday afternoon.

The man also suffered a serious wound chest in the attack, according to Nguyen Khanh Hung, a senior doctor at Cho Ray, adding that Quoi still needs to undergo a few more surgeries in order to recover from such severe injuries.

According to Quoi, he had been an employee at the ecotourism site before leaving the job a few years ago to work as a mason.

The incident happened when he went to visit his old colleagues at the site.

At around 1:00 pm, the victim placed his right arm on the bar of the tiger cage when he was mauled by the animal.

He tried to ward off the tiger with his left arm, but ended up losing both of his upper limbs.

According to employees of the site, there are three tigers at the venue and their cages were being repainted that day.

Police’s report showed that each bar of the tiger cage was eight centimeters apart, thus an adult’s arm can easily fit through the gap.

Quoi had consumed alcohol before arriving at the venue, VnExpress online newspaper quoted officers as saying.

Records also revealed that Huynh Van Hai, the owner of the ecotourism site, was sentenced to 36 months in prison for illegally trading tigers and their bone paste.

Hai’s son and ten other people were also jailed for the offense.