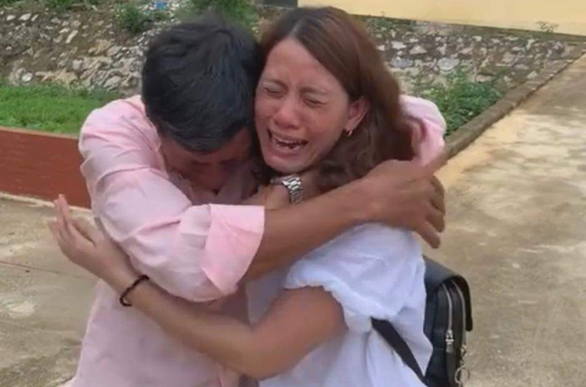 A woman from Bac Lieu Province in the Mekong Delta of Vietnam was on Wednesday reunited with her long-lost Vietnamese family after spending more than two decades in China, where she was forced into marrying a Chinese groom.

After years of searching, her family declared her deceased.

On Sunday, 22 years since her disappearance, Hon was spotted wandering in the northern Vietnamese province of Lang Son Province, near a border gate with China.

Barely speaking any Vietnamese, she was brought to the provincial social protection center where officials found a note in her belongings containing the names and whereabouts of the woman’s family members.

“She mainly communicated in Mandarin, as her Vietnamese was very limited,” a leader of the Lang Son Social Protection Center told Tuoi Tre (Youth) newspaper on Wednesday, adding that she “showed signs of exhaustion and unusual hysteria.”

A local social club helped post a video of Hon and the information found in her note to Facebook in the hope that it would reach her family in Bac Lieu.

Hon’s family saw the video and made contact with her caretakers three hours after it was posted on the social media site.

Her older brother Nguyen Van Tang, 51, arrived in Lang Son on Wednesday to pick up his sister.

The siblings embraced each other in tears. It was their first reunion since 1997.

At 3:00 am on Thursday, Hon and Tang landed in Can Tho City in the Mekong Delta of Vietnam after a two-hour flight from Hanoi.

Tang refused to answer any question from the press, while Hon said briefly after arriving at the airport that she was not fluent in Vietnamese and could only speak Chinese.

Hon added it was the “happiest feeling in the world” to be able to return to her hometown and be reunited with her parents and siblings.

She and her brother continued their trip by car and reportedly arrived at their home in Bac Lieu at around 6:00 am on Thursday.

Speaking with Tuoi Tre, Hon said she had been working a labor job in Can Tho for around a month in 1997 when she met a man who claimed to also be from Bac Lieu.

He offered to give Hon a lift to their mutual hometown and she agreed.

On the way home, she was offered food and drinks by the man and fell asleep after eating the meal.

When she woke up, Hon found herself in China with no memory about her past.

Hon said she could not even remember which country she came from or speak any language after waking up from the sleep.

She was then sold to a Chinese groom three years her senior and had lived with him until she was recently kicked out of his house for not being able to give birth to a child.

Hon sought help from local police officers, who helped bring her to the border gate with Vietnam and report the case to Vietnamese authorities.

She said it was only recently that she remembered being a Vietnamese thanks to watching a television program that included basic Vietnamese words such as “having a meal” and “one, two, three, four,...”.

Hon said she is most worried about adapting to her new life in Vietnam given the language barrier and her lack of education.