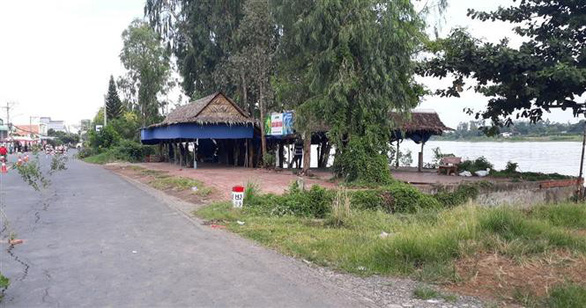 National highway at risk of sinking in Vietnam’s Mekong Delta

A section of a national highway in An Giang Province, located in Vietnam’s Mekong Delta, is at risk of sinking into the river, with at-risk residents having been evacuated.

The situation occurred along National Highway No. 91 in Binh My Commune, Chau Phu District, which runs adjacent to the bank of Hau (Back) River, according to the Vietnam News Agency.

National Highway No. 91 is considered a vital route in An Giang as it passes the provincial capital of Long Xuyen and Chau Doc City before reaching the Vietnam-Cambodia border.

Multiple cracks, which are about one centimeter wide each, were discovered along the surface of the road on Saturday morning.

As of Sunday morning, the widths of the fractures increased to 1.5 to two centimeters, directly threatening at least two houses and two cafés situated along the national highway, as well as those who commuted on the road.

The section of the road is also at risk of collapsing into the Hau River.

An Giang chairman Nguyen Thanh Binh led a delegation of officials to examine the situation on the same day.

All affected residents, along with their valuable belongings, have been evacuated to a safer area.

Local authorities also marked the dangerous zone and have people guard the areas around the clock to ensure safety for commuters.

Traffic will be closely monitored to prevent heavy vehicles from entering the affected section of the highway.

The cracks are attributed to a change in river flow and weak ground, according to authorities.