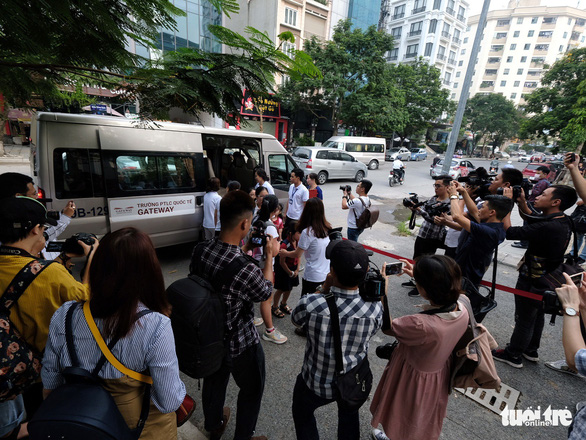 A first grader in Hanoi died on Tuesday after he had been apparently neglected for hours in a van contracted by his school to transport students.

In an official statement, the school said the boy, reportedly six years old, was still alive when he was found inside the 16-seater van, despite video evidence that suggested otherwise.

L.H.L. began his first grade at the Gateway International School (GIS) in Cau Giay District in Hanoi on Monday.

On Tuesday, only his second day at GIS, L. was picked up by a school bus at around 7:00 am, his parents said.

Past 4:00 pm the same day, L.’s supervising teacher reached his parents on the phone to inform them that the boy had not been at school all day.

A search was initiated and the boy was found inside one of the 16-seater vans the school had contracted to transport students.

In CCTV footage acquired by Tuoi Tre (Youth) newspaper, the boy appeared already stiff and motionless when he was removed from the van and taken inside the school.

CCTV footage of people removing a six-year-old boy from a school bus, where he had been trapped for hours, at the Gateway International School in Hanoi, Vietnam, August 6, 2019.

GIS said in a statement late Tuesday that L. was still alive when he was found, although his skin had turned purplish.

School medics performed first aid on the boy before rushing him to the E Hospital in the capital, where he died, the school claimed.

GIS said in the same statement that L. had dozed off on the school bus and a managing teacher assigned on the vehicle had forgotten to wake him up.

A third party that provided the van service admitted its driver had also neglected to double-check the vehicle after dropping students off at school on Tuesday morning.

Although L.’s absence was noted by his homeroom teacher and reported to the school’s administration through a computer system, nobody informed his parents until after 4:00 pm the same day, Hanoi officials said at a press conference on Wednesday morning.

GIS announced in another statement released to the press on Wednesday it had suspended all employees related to the incident.

Hanoi chairman Nguyen Duc Chung has requested a thorough investigation into the case.