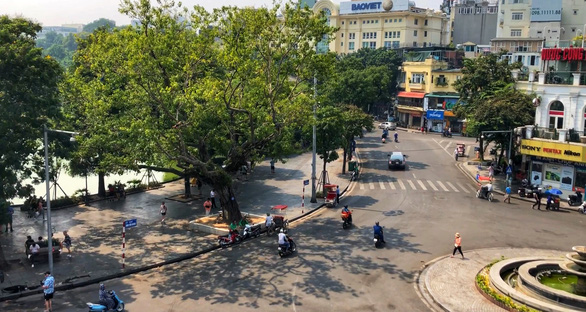 A plan to ban vehicles from entering the streets surrounding Hoan Kiem Lake in Hanoi in order to pilot a proposal that would see the area transformed into a permanent pedestrian zone is stirring concern from local residents over its potential negative impact on their daily lives.

The vehicle ban, expected to be tested in a month, is aimed at expanding the pedestrian area already zoned off to accommodate the growing number of tourists visiting the place, according to the municipal administration.

Hanoi first deemed the area as a vehicle-free zone on weekend nights, from Friday to Sunday, in 2016.

Though the area has since become a top destination for tourists visiting the capital city, the municipal administration hopes extending the vehicle ban to weekdays will boost Hoan Kiem’s appeal to visitors.

The municipal Department of Transport is charged with deciding whether the ban should be effective 24/7 or only during certain hours, as well as how to reroute traffic.

Assuming the Department of Transport is able to come up with a suitable detour for traffic in the area, Hanoi authorities will officially extend the current weekend ban to all seven days of the week.

Despite still being in the planning stages, locals have already begun voicing their opposition, saying the government’s proposal to force the area’s residents to walk their vehicles in and out of the pedestrian zone will negatively impact their lives.

“If vehicles are banned for a whole month, even just during a certain time frame, our daily lives will be severely affected,” said Nguyen Van Phuong, a government worker residing near Hoan Kiem Lake.

“It will be very inconvenient for those of us who commute from our homes to workplaces in other districts.”

Thang’s concerns were echoed by H., the owner of a glasses store on Luong Van Can Street.

“Our income will definitely decrease,” he said, adding that locals typically prefer to use vehicles when they go shopping.

“I think it’d be better to stick with the current three-day ban,” he suggested.