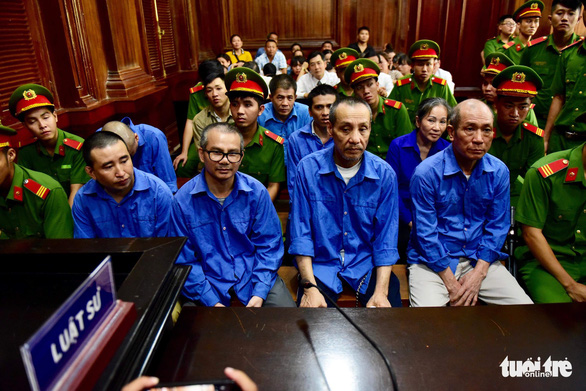 A court in Ho Chi Minh City on Monday sentenced eight defendants to death and another to life imprisonment for trafficking hundreds of kilograms of heroin and meth originating in Laos.

The nine defendants, born between 1954 and 1986, were brought to court with the charge of drug trafficking and found guilty of smuggling 132 kilograms of heroin and 55 kilograms of methamphetamine, or meth.

According to their indictment, 45-year-old Phan Huu Hieu played the primary role in the drug ring.

Hieu received the illegal drugs from a Lao citizen in the central city of Da Nang and transported them to Ho Chi Minh City, where he sold them to Ly Tho Phuoc, 52, and Phan Thach Dinh, 65.

On July 11, 2018, Dinh was arrested while carrying 40 bricks of heroin he had just bought from Hieu. The same day, Hieu was caught handing a suitcase containing 60 heroin bricks to Phuoc.

Police also seized another 47 bricks of the narcotics at Dinh’s residence in District 3, Ho Chi Minh City, along with another 32 bricks at a house in Binh Tan District. Six other suspects were arrested on later dates.

Hieu, Dinh and Phuoc were among eight convicts who were handed the death penalty by the Ho Chi Minh City court. Only one defendant received a life sentence for their crime.

Vietnamese police have launched an investigation to hunt for others linked to the traffickers.