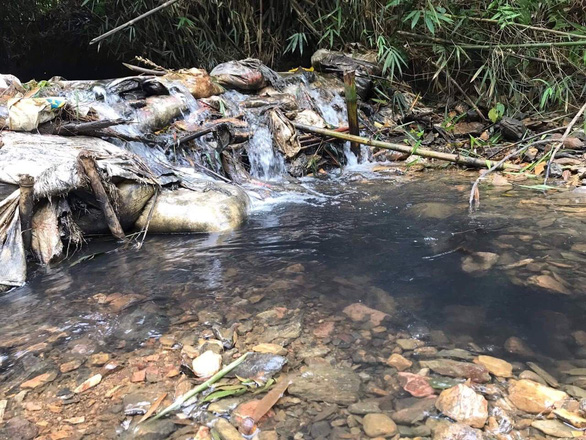 Local authorities are hunting for a truck that reportedly dumped engine oil into a stream in the northern province of Hoa Binh, as test results have indicated a high concentration of waste oil in the tap water in parts of Hanoi.

A source close to Tuoi Tre (Youth) newspaper confirmed on Tuesday that Hanoi authorities have arrived at a conclusion on lab tests of the tap water reported by residents to have been smelly for days.

The results showed that the water contains a high level of waste oil, while its smell does not meet the standard set by the Ministry of Health.

The chlorine concentration in the water was also higher than usual but still within the safety limit.

Hoang Van Thuc, deputy head of the Vietnam Environment Administration under the Ministry of Natural Resources and Environment, confirmed on Monday that the agency is working with the Hoa Binh environment department to verify the reason behind the issue.

Residents in Ky Son District, Hoa Binh Province, about 60 kilometers west of Hanoi, previously reported catching a truck dumping engine oil into a local stream on the night of October 8.

As it rained heavily later that night, the oil quickly spread to a nearby canal, which led water from the Da (Black) River into a water treatment plant of Song Da Water Investment JSC.

The Hoa Binh People’s Committee has tasked police officers with hunting for the truck and its driver to assist the investigation.

However, Song Da company must also be responsible for failing to ensure the quality of its water supply, another Tuoi Tre source stated, adding that the firm failed to report the oil spill to competent agencies as well.

Initial information showed that the firm was made aware of the oil spill along the canal on October 9-10 and had its employees remove the oil by skimming it.

The company also increased the amount of chlorine, used to kill bacteria and other microbes in water treatment, after discovering that their water source was contaminated.

The added chemical and oil might be the reason residents in Ha Dong, Thanh Xuan, Hoang Mai, and Nam Tu Liem Districts in Hanoi have found their tap water smelly since around 8:00 am on October 10.

Affected residents said the tap water in their homes smelled like chlorine at first.

The smell later changed to that of burnt plastic.

The Hanoi Department of Health, in coordination with the Department of Construction, took multiple samples of the affected water on the following day for lab tests.

Residents were advised to refrain from using the tap water in their homes and have been buying fresh water from other sources over the past five days.