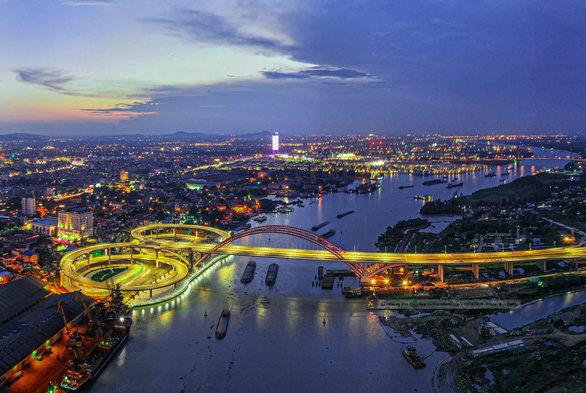 A 1.5-kilometer bridge, whose unique design draws inspiration from the wings of a seabird, was inaugurated in the northern port city of Hai Phong on Tuesday after nearly three years of construction.

The Hoang Van Thu Bridge, which links the city center with a new urban area to the north of the Cam River, is officially open to traffic after 33 months of building, beginning in 2016.

The VND2,173 billion (US$94.4 million) bridge was entirely funded with the municipal budget.

The structure was designed and constructed by a team of Vietnamese architects and engineers, drawing inspiration from the wings of a seabird.

The main part of the bridge, which weighs more than 5,000 metric tons, includes a 527-metric-ton steel arch that is the largest of its kind in Vietnam.

The speed limit is 80 kilometers per hour for vehicles on the main deck of the bridge, and 40-50 km/h on its branches.

Two elevators for pedestrians are also installed at one end of the bridge located in the urban district of Hong Bang.

A ceremony was held on Tuesday morning to celebrate the inauguration of the Hoang Van Thu Bridge.

Speaking at the event, Vietnam’s Prime Minister Nguyen Xuan Phuc highlighted the importance of the bridge in opening a new development space as Hai Phong is aiming to relocate its administrative center to the north side of the Cam River.

Hai Phong is one of Vietnam’s five centrally-controlled cities and is home to one of the country’s busiest seaports through which nearly 11 million metric tons of goods passed in the first half of 2019.