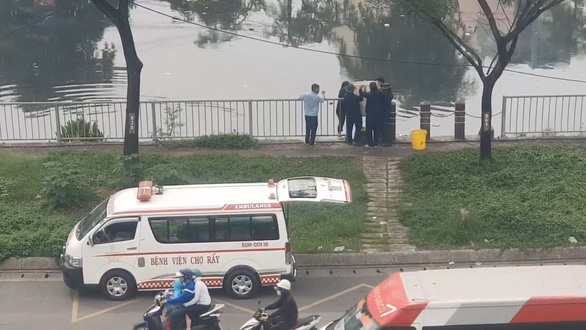 A viral video that alleges staff of a famous hospital in Ho Chi Minh City of dumping "medical waste" into a local canal actually shows them releasing fish into the waterway, the hospital said on Saturday.

In the video, an ambulance labeled “Cho Ray Hospital” could be seen pulling over somewhere on Vo Van Kiet Street, next to the Tau Hu Canal in District 5, Ho Chi Minh City.

As the vehicle's back door opened, five men in dark blue uniform got out of the ambulance, carrying a large white plastic container.

Three other containers, two of which were white and the other yellow, could be spotted inside the vehicle.

Each of these containers had its liquid content poured into the canal one by one by the hospital staff, the footage shows.

The YouTube account titled the video "They are disposing hospital waste into the river", which convinced many viewers that the hospital staff was illegally dumping wastewater into the canal.

A representative of Cho Ray Hospital clarified the issue with Tuoi Tre (Youth) newspaper on Saturday, saying that the men in the video, who are indeed the infirmary’s staff, were actually releasing fish into the canal.

According to the representative, patients and their family often free fish to large pools inside the hospital’s premise in District 5 as a way of offering their prayers for good health.

As time goes by, the population of fish in these pools has grown to such an extent that the hospital has had to catch and release them into the wild, the representative said.

This is the second time the hospital has done this, with about 200 kilograms of fish freed on each occasion.

“There are too many fish in the pools and they will die if we don’t release them,” the hospital representative said.

“We have our staff bring the fish to the canal on the weekend and release them, hoping that they will have a better chance of survival,” the representative added.

“We hope people understand our cause.”