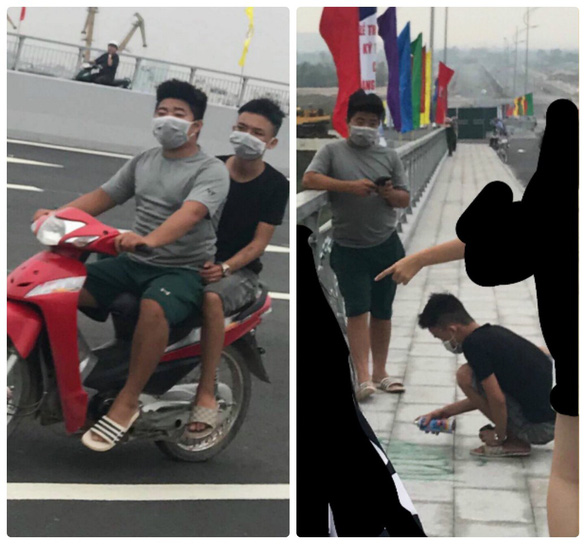 Days after a new landmark bridge was inaugurated in the northern city of Hai Phong, its pedestrian sidewalks have been defaced by paint as street vendors race to mark "territories" for their unlawful vending businesses.

The Hoang Van Thu Bridge, which stretches more than 1.5 kilometers linking the center of Hai Phong with a new urban area to the north of the Cam River, was officially inaugurated on Tuesday after 33 months of building.

A team made up entirely of Vietnamese architects designed and built the VND2,173 billion (US$94.4 million) bridge, drawing inspiration from the wings of a seabird.

In photos that surfaced on Facebook on Friday night, young men wearing facemasks were seen pulling over by the sidewalks on the Hoang Van Thu Bridge and spraying some Vietnamese names in green paint on the cement ground.

The men apparently tried to ‘pre-book’ a location for their upcoming vending businesses that would be illegally set up right on the pedestrian walkways on the new bridge.

In Vietnam, street vendors run their businesses on self-declared "occupied territories" that no other vendors should intrude.

For these vendors, a new attraction such as the Hoang Van Thu Bridge often means a new business territory that is available for claiming as their own "territory" on a first come, first served basis.

The vendors will mark their supposed "ownership" of these areas by writing their names on the ground.

Ta Viet Dong, general director of the management board for urban development projects and civil construction investment of Hai Phong City, which is the developer of the Hoang Van Thu Bridge, confirmed with Tuoi Tre (Youth) newspaper on Saturday that the green texts have just appeared after the new bridge was open to traffic on Tuesday.

Dong said that his unit is in discussions with relevant agencies to comprehensively resolve the vandalism as well as prevent sidewalk encroachment on the bridge.