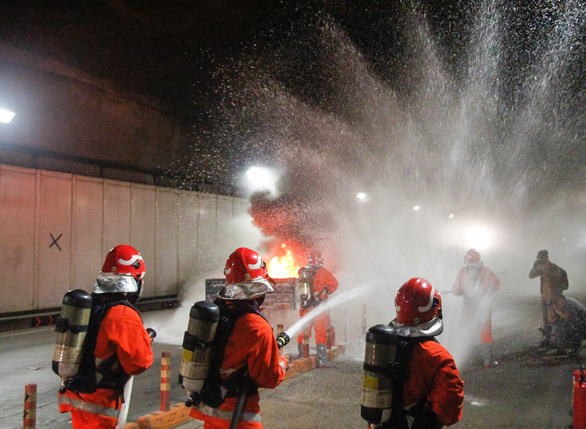 An annual fire drill was held at the Saigon River Tunnel in Ho Chi Minh City on Sunday to train responders for future emergencies.

The firefighting and rescue drill was organized by the Saigon River Tunnel Management Center in coordination with the municipal Department of Fire Prevention and Control, Rescue and Salvage.

The underwater tunnel, which connects the city’s District 1 and District 2, was closed to traffic for two hours between 1:30 pm and 3:30 pm on Sunday for the event.

Vehicles were banned from entering the tunnel while traffic on nearby streets was also rerouted during the two-hour drill.

The hypothetical situation was that a fire started from two trucks which had collided head-on while moving in opposite directions inside the 1,490-meter tunnel.

According to a Tuoi Tre (Youth)newspaper correspondent, traffic congestion was observed on some streets near the tunnel such as Nguyen Huu Canh, Ton Duc Thang, and Vo Van Kiet while the fire drill was taking place.

Traffic on these streets returned to normal after the exercise.

The Saigon River Tunnel lies 27 meters under the Saigon River at the deepest point and is the longest underwater tunnel in Southeast Asia as well as the first in Vietnam.

A firefighting and rescue drill has been held annually at the tunnel since its inauguration in 2011.

Below are some photos of the fire drill held on Sunday.