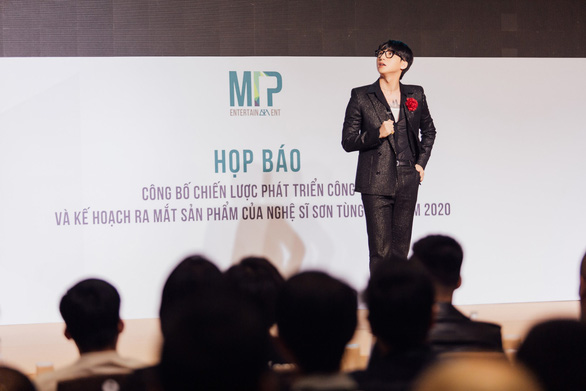 The young pop singer hosted a press conference in Ho Chi Minh City on Wednesday morning to make an announcement on the development strategy of his entertainment company for the next three years.

This is the first time such an announcement event has been set up since M-TP Entertainment’s foundation.

The unlikely young businessman said what makes Skysocial different from existing social networks is that it will allow users to effortlessly connect with friends of the same interests and in the same regions.

“Skysocial users will find it easier to make new friends, chat and interact with their idols,” Son Tung M-TP said.

“Skysocial will classify users based on places of residence and personal interests."

According to the pop star, on the new social networking site, celebrities are just supporting actors, while users are the leads.

However, information of M-TP Entertainment’s partners in this social network project was kept undisclosed.

Some of these songs were involved in different plagiarism scandals.

He is currently one of the most-followed Vietnamese celebrities on social media with nearly 10.5 million followers on Facebook and 3.7 million on Instagram.

There are currently 65 million users of Vietnam-made social networks, compared to 90 million users of foreign platforms, in Vietnam, according to figures provided by Minister of Information and Communications Nguyen Manh Hung at a meeting in November 2019.

Facebook remains the most popular social network in the Southeast Asian country with around 59 million users as of November 2019, or around 60 percent of the nation’s population of 96 million, according to online statistics portal Statista.