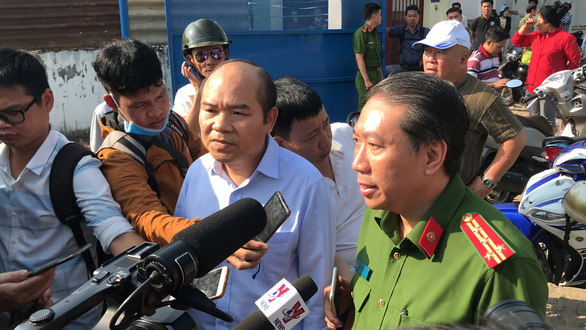 Police in Ho Chi Minh City have arrested a 38-year-old man for starting a fire at a neighbor’s house that killed five family members at their home earlier this week.

Nguyen Huu Phuoc, born in 1982, was arrested on Wednesday afternoon for setting ablaze the 30-square-meter house of Le Thi Hue, who was his neighbor in alley 567 on Do Xuan Hop Street in District 9, police said on Thursday.

The fire erupted in the wee hours of Tuesday and killed five people in Hue’s house when it was finally extinguished after three fire engines and 22 firemen had struggled for 40 minutes.

Two of Hue’s grandchildren who live in the same house had previously returned to their hometown in another province for the Lunar New Year holiday and were not inside the building when it was consumed by the flames, a source told Tuoi Tre (Youth) newspaper.

Police in District 9, in collaboration with the municipal police, then launched an investigation into the incident as preliminary findings at the scene and footage extracted from security cameras showed that it was a criminal case.

Through professional measures, authorities determined Nguyen Huu Phuoc, who lives next to the victims’ house, as the suspect and started gathering the evidence of his crime, while a secret agent was tasked with tracking Phuoc.

Police officers in District 9 deployed a functional force to arrest Phuoc while he was at his home at 5:00 pm on Tuesday, just one day after the fire struck.

At the police station, Phuoc initially denied the crime, saying he was not involved.

It was not until 10:00 pm on Tuesday that the 38-year-old suspect could no longer argue against the evidence gathered by police and admitted he burned Hue’s house.

According to Phuoc, he had been annoyed by Hue’s family members as they had always occupied the two families’ shared path to park their motorbikes despite his repeated complaints.

On Tuesday morning, Phuoc soaked rags with gasoline, burned and threw them over the four motorbikes of Hue’s family members, which were parked in front of their house, out of an attempt to scare the victims.

Unfortunately, the fire did engulf not only the four vehicles but also the five family members.

After the crime, Phuoc remained calm at his home, spending daily life as usual, before he was arrested.

The case is currently under investigation by police in District 9.