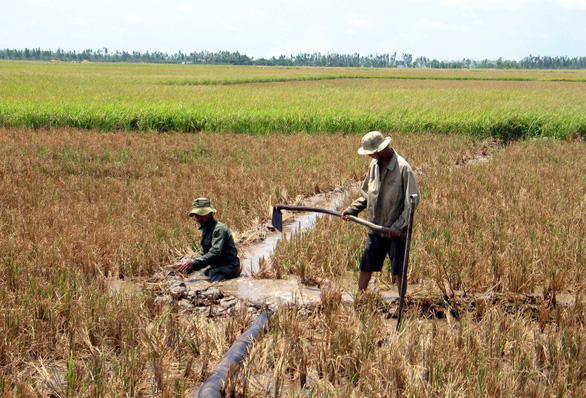 Each of the five provinces Long An, Tien Giang, Ben Tre, Kien Giang, and Ca Mau in Vietnam’s Mekong Delta region that have declared a state of emergency due to drought and saline intrusion will receive VND800 million (US$34,000) to cope with the natural calamities, according to the Ministry of Natural Resources and Environment.

On the same day, the Ministry of Natural Resources and Environment also reported to Prime Minister Nguyen Xuan Phuc on the situation of saline intrusion in different Vietnamese areas.

Accordingly, drought and water shortage occurred on a large scale in the central and Central Highlands regions, with most rivers having run out of water from the beginning of the dry season.

The dry season in these regions normally extends from November until the end of April the following year, according to the official Vietnam News Agency.

Major resevoirs in these regions are currently filled up to only between 15 and 70 percent of their capacity.

Meanwhile, water levels are at 40-80 percent the capacity of small- and medium-sized irrigation reservoirs.

The ministry forecasts that the drought and water shortage may last until August and can become more serious in the next months, with low flow persisting and getting more severe than it was in last year’s dry season.

For the Mekong Delta region, it is forecast that the saline intrusion in areas near the Mekong River’s estuaries will weaken, but the salinity level will remain high. Hot weather and drought will continue.

Specifically, saline intrusion in Vam Co River, which snakes through Long An and Tien Giang, and Cai Lon River, which flows in Kien Giang, will stay severe until the end of April before gradually subsiding.

Reporting to the prime minister on solutions for mitigating the impacts of the drought, Minister Ha said his ministry has handed over to local authorities wells that can be used to build centralized water supply facilities in the affected localities.

The ministry has also sent results of surveys and searches for groundwater, observation data, forecasts, and warnings of water resources to local agencies in order to implement short- and long-term measures on preventing drought and water shortage, with a special focus on ensuring water supply for people in scarcity-hit regions.

Last month, Prime Minister Phuc approved a plan to provide VND70 billion ($3 million) to each of the same five provinces to respond to ongoing problems with seawater intrusion and drought.

The funding was meant for use in pumping water, dredging temporary dams, digging ponds, extending pipelines and water-transporting equipment, and assisting people in need.