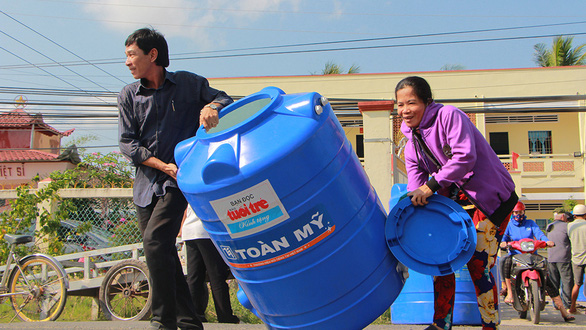 Forces from different sectors have taken joint action to help people in the Mekong Delta region of Vietnam cope with historic drought and saltwater intrusion described as one of the century’s worst.

The Vietnam People’s Navy is the latest force to have shown support for salinity-hit Mekong Delta provinces.

The previous day, the United Nations Development Program (UNDP) presented US$185,000 funded by the Global Emergency Fund to the Ministry of Agriculture and Rural Development to back the Mekong Delta’s response efforts.

As part of its assistance, the UNDP also provided 300 water tanks for affected households in Ben Tre Province and offered livelihood support for 176 other families in Ca Mau Province.

The Mekong Delta, which produces more than half of the country’s rice, has so far seen a total of 33,000 hectares of rice paddies damaged and nearly 70,000 households suffering from the lack of water, according to the Vietnam Government Portal.

Salinity of four grams per liter will continue to spread in the Mekong Delta, penetrating as deep as 110 kilometers from some major estuaries this month, according to a report by the Southern Institute of Water Resources Research in Ho Chi Minh City.

That is three to five kilometers more than in the same period in 2016, when the region was hit by what was widely described as the worst drought it had seen in a century.

The government estimates drought and salinity will affect 362,000 hectares of rice and 136,000 hectares of fruit trees in the Mekong Delta this year, while more than 120,000 households will suffer from water shortage.

As of March, salinity had hit about half the districts in ten out of the 12 provinces and one city in the region.

Some 90,000 people have had insufficient access to water for drinking and domestic use, according to the Vietnam News Agency.

Experts say saline intrusion and drought will be even harsher in the next two months as it is just halfway into the dry season, which starts in late November and lasts until May, in the Mekong Delta.

The Long Xuyen Quadrangle is a 489,000-hectare area in the Mekong Delta delimited by the Vietnam-Cambodia border, the Gulf of Thailand, the Cai San Canal, and the Hau (Back) River.

Kien Giang has also invested in expanding its water pipelines network and raising the capacity of water supply plants.

In the meantime, tanker trucks are used to transport fresh water to local households.

In addition, the province has dredged the local Ma River to limit saline intrusion.

Ben Tre has also installed reverse osmosis water purifiers at twelve out of 35 water plants in the province.

Tien Giang has begun constructing a steel dam on Nguyen Tan Thanh Canal to conserve fresh water for the province’s eastern part and the western part of its capital city of My Tho, where more than 800,000 households are located.

The dam is expected to also contribute to saving fresh water for Tien Giang’s Tan Phuoc District and the neighboring province of Long An.

Tien Giang has installed 50 public faucets for 2,200 households to use.

Long An Province provided funding to buy 160 water tanks for households in need in Can Giuoc District.

In the long term, Ky Quang Vinh, former staff of the Office for Climate Change in Can Tho City, advised localities build freshwater reservoirs.

“Farmers should be encouraged to have their own reservoirs,” said Vinh.

“The government can provide [the farmers with] tarpaulins, technical assistance, and guidance on irrigation methods,” he added.