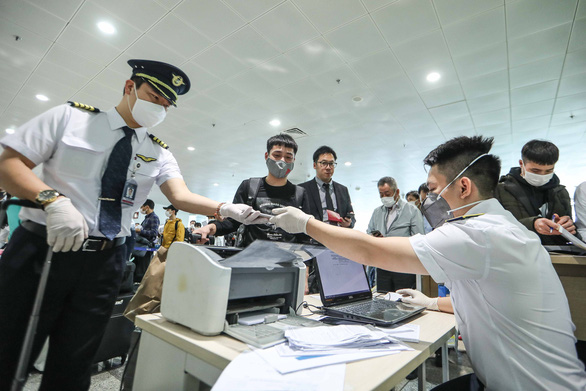 According to the National Steering Committee for COVID-19 Prevention and Control, the three patients include a Briton and two Brazilian citizens.

They were hospitalized between March 24 and 30, and will continue to undergo 14 days of quarantine for monitoring after their discharge.

The new recoveries raised the number of COVID-19 patients having exited hospitals in Vietnam to 201.

A British pilot is still undergoing treatment for his critical conditions in Ho Chi Minh City.

The 43-year-old man, who went down with COVID-19 last month, has made it through a critical phase and is showing positive progress in his recovery, according to Deputy Health Minister Nguyen Thanh Long.

Long revealed the information at a videoconference of the Ministry of Infomation and Communications on telemedicine applications in Hanoi on Saturday morning.

"The British pilot [in Ho Chi Minh City] has made positive progress. We hope this case can escape from the scythe of death," Long said.

The Briton, who has been treated at the Ho Chi Minh City Hospital for Tropical Diseases, had previously been critically ill with severe blood-clotting disorders, lung damage, and a high white blood cell count.

He has been on a ventilator and receiving outside-body life support in the form of extracorporeal membrane oxygenation (ECMO).

Doctors said the pilot's condition might have been attributed to his body mass index (BMI) of 30.1, classified as "moderately obese" by the World Health Organization.

Apart from the British pilot, all other severely ill COVID-19 patients in Vietnam have been successfully treated, according to Long.

Long said professional guidance and support from leading experts and the application of information technology in treatment and telemedicine have closed the gap between upper- and lower-level hospitals in Vietnam.

Vietnam has so far confirmed 268 cases of COVID-19, a tally that has stayed unchanged for two days straight since Thursday.

Only 67 patients remained in treatment on Saturday morning, including Vietnamese and foreigners.

No death related to the respiratory disease has been reported in the country.