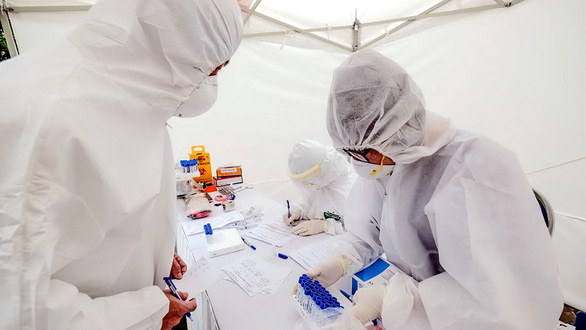 The British Department of Health and Social Care has granted the CE marking and Certificate of Free Sale (CFS) to Vietnam’s test kits used in novel coronavirus disease (COVID-19) diagnosis, according to the Vietnamese government.

The test kits were produced by the Vietnam Military Medical University and Viet A Corporation, as an assignment given by the Ministry of Science and Technology, the government said in a post on its verified Facebook account, where official information and documents are frequently published.

The EU’s medical laws stipulate that once a product has obtained the CE marking and CFS from any member state of the union, it can be sold freely in the entirety of the European Economic Area, including the UK.

"CE marking indicates that a product has been assessed by the manufacturer and deemed to meet EU safety, health and environmental protection requirements," the EU said on its official website.

The UK officially left the EU on January 31 but the medical laws are still applicable to the kingdom until the end of December 31, the Vietnamese government said.

A partner has bought the test kits and secured the exclusive right to distribute them in the UK, India, Mexico, the U.S., and some European countries, following the granting of the CE marking and CFS.

In March, 20 countries negotiated with Vietnam about the purchase of the test kits.

Initially, Viet A will ship its test kits to Iran, Finland, Malaysia, and Ukraine.

Iran has ordered 4,000 kits while Ukraine has placed an order for 300 kits.

In Vietnam, the People’s Committee of Hanoi has ordered 200,000 tests for use in the capital and for donation to Italy.

The World Health Organization (WHO) recognizes only one ‘golden standard’ to confirm a COVID-19 case, which is the real-time RT-PCR method.

Vietnam’s test kits employ the same method and return a conclusive result in over two hours.

One kit includes 50 tests, to be used 50 times. In theory, it can be utilized for testing 50 patients.

Vietnam’s test kits match the quality of those following the guidelines of the WHO and the U.S. Centers for Disease Control and Prevention, the government said.

Viet A is capable of producing 10,000 kits a day. The corporation can triple its production for international aid or to meet domestic and export demands.