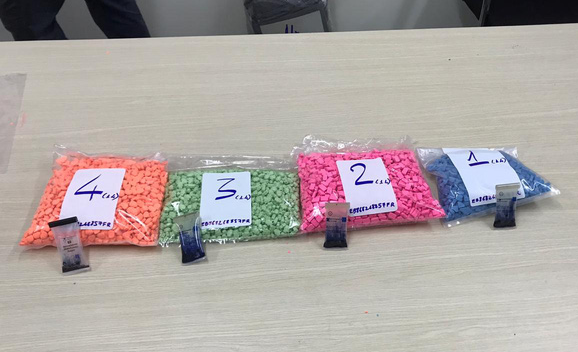 18kg of drugs found inside parcels sent from Europe to Vietnam

Customs officers in Ho Chi Minh City have discovered more than 18 kilograms of drugs hidden inside 16 parcels sent from Europe over the past two months.

The municipal Department of Customs confirmed on Tuesday it had been monitoring non-commercial import consignments suspected of containing narcotics for the last two months.

In coordination with relevant agencies, the customs department has closely examined 16 parcels sent from Europe.

All of these parcels were found to be sent to fake addresses, and lacked recipient names.

Three of them, which were imported into the country via express couriers, were found containing over five kilograms of synthetic drugs in the form of MDMA pills, also known as ecstasy, and 456.2 grams of cannabis.

The drugs were carefully concealed inside multiple types of regular objects.

They contained more than 13 kilograms of MDMA pills and 124 grams of cocaine.

The total value of these narcotics is estimated at nearly VND60 billion (US$2.5 million).

The customs department of Ho Chi Minh City is working with the municipal Department of Police to expand the investigation.