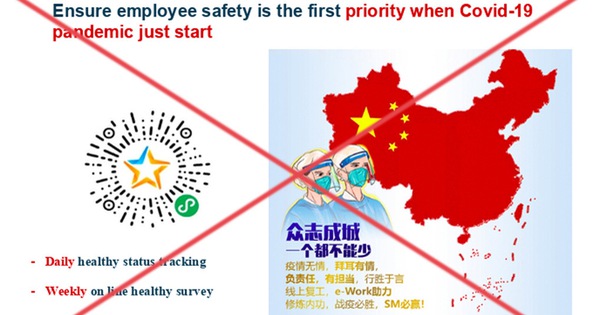 Inspectors from the Ho Chi Minh City Department of Information and Communications on Friday afternoon booked the general director of pharmaceutical firm Bayer Vietnam for spreading an internal document containing an image printed with China’s illegal ‘nine-dash line’ via email.

During a working session with the inspectors on the same afternoon, Bayer Vietnam’s general director Lynette Moey Yu Lin, a Chinese Malaysian woman, admitted that she had sent an email attached with a 19-megabyte file on prevention and control of the novel coronavirus disease (COVID-19) pandemic to nine company employees on April 27.

A page in the digital document was found to contain a map of China which included the infamous ‘nine-dash line,’ a demarcation line used by China to represent its illegal claims in the East Vietnam Sea.

Under Bayer Vietnam's working procedures, documents from the general director position will be sent to department heads, who would subsequently share them with lower-level employees.

However, the company stated that none other than the nine initial email recipients had received the file in question.

Lin on Friday also claimed she had taken technical measures to withdraw the April 27 email.

She is now subject to an administrative fine of VND25-35 million (US$1,072-1,500) for providing information that wrongly illustrates Vietnam’s sovereignty.

The ‘nine-dash line’ is an arbitrary demarcation line used on Chinese maps to illustrate Beijing’s illegal and unilaterally declared claims to vast expanses of the East Vietnam Sea, including large swathes of Vietnam’s Continental Shelf.

Bayer AG is a German multinational pharmaceutical and life sciences company operating in the fields of healthcare and agriculture.

Bayer Vietnam, which currently has about 700 employees, has been present in the country since 1994, according to a declaration on its website.