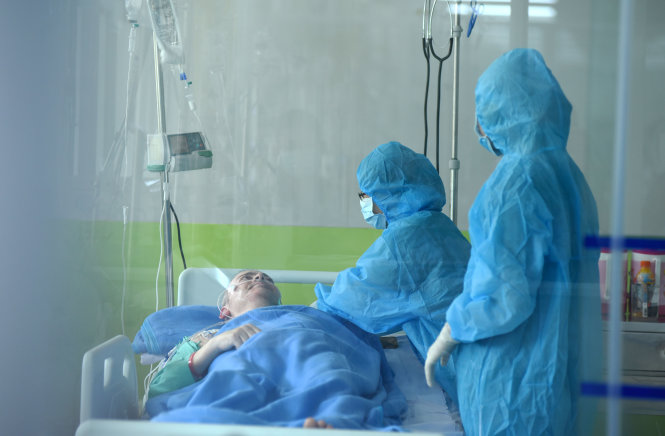 A British man who is Vietnam’s most critically sickened novel coronavirus disease (COVID-19) patient is expected to be discharged from the hospital and return to his home country in the near future once his lung capacity and physical function fully recover.

It has been six days since the Briton was disconnected from a ventilator, the national committee for COVID-19 prevention and control confirmed on Friday morning.

The patient is now able to breathe on his own with oxygen support provided at 0.5 liters per minute.

The amount of supplemental oxygen has decreased by six times compared to the first day he was disconnected from the ventilator.

The muscular strength of his arms and his heart, liver, and kidney functions have fully recovered.

His legs’ muscular strength has also been improving continuously over the past days.

A CT scan on Wednesday showed that his lung capacity was at 90 percent.

This is considered a remarkable improvement as only ten percent of his lungs were functional in mid-May while the rest had solidified due to COVID-19.

A lung transplant was believed to be the only way to save the Briton at the time.

However, he is now able to move his arms and legs, write on a board, sunbathe daily, practice walking with health workers’ help, talk to doctors, and remember the unlock PINs for his phone and iPad.

Doctors at Cho Ray Hospital in Ho Chi Minh City, where the Briton is being treated, said he will need only a short amount of time to fully restore his physical functions and lung capacity, before being able to leave the infirmary and return to his home country.

After being cleared of the coronavirus following his treatment at the Ho Chi Minh City Hospital for Tropical Diseases, he was transferred to Cho Ray Hospital on May 22 in a coma and with severely damaged lungs.

He has been making a remarkable recovery in the past weeks.

He was taken off his ventilator on Saturday, and stopped taking antibiotics used to treat other bacterial infections on Monday.

Vietnam’s COVID-19 tally has reached 342, with 325 having recovered, according to Ministry of  Health statistics.