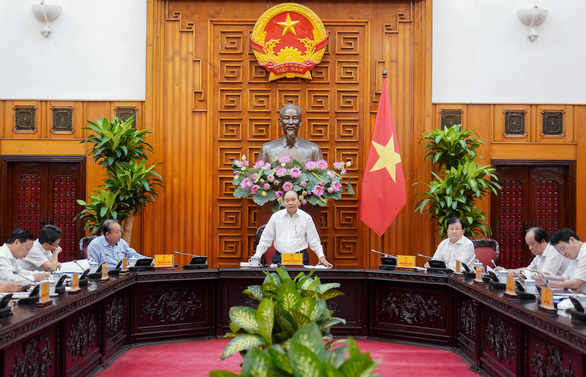 Prime Minister Nguyen Xuan Phuc has asked the state-run Vietnam Electricity (EVN) to review recent abnormal hikes in household electricity bills, stressing that mistakes that affect people’s rights must be avoided and violations, if any, must be strictly handled.

The order was made during a regular government meeting in Hanoi on Monday afternoon.

Recently, people in different localities in Vietnam have complained about unusual increases in their household electricity bills.

Particularly, Tran Viet Dung, a customer of EVN in Dong Hoi City in the north-central province of Quang Binh, was startled to see his household’s monthly power usage rise 33 times from 200-300 kilowatt hours (kWh) to over 18,200 kWh in June.

With the electricity bill worth over VND58 million (US$2,511), Dung filed a complaint to EVN’s branch in Dong Hoi City, which then found out that its employee made a mistake in recording the customer’s usage.

After recalculation, Dung’s household only had to pay about VND500,000 (US$21.64) for electricity for the month.

The household electricity bill of Dao Thi Gai in Van Don District in the northern province of Quang Ninh was multiplied by 243 times, from VND368,335 ($16) to VND89.4 million ($3,870), in June due to a similar mistake by the EVN Van Don branch.

The business development manager of the EVN Van Don branch was suspended following the incident.

Addressing reports of these cases at Monday’s meeting, Prime Minister Phuc asked EVN to avoid making mistakes that affect electricity users’ rights and benefits, and clarify and strictly handle violations, if any.

In response to the prime minister, EVN chairman Duong Quang Thanh said he had directed the group’s branches in the localities in question to quickly handle the reported cases and make a public explanation to its customers.

At the event, PM Phuc also emphasized the Minister of Industry and Trade’s responsibility for ensuring the electricity source and grid for national development, making specific plans and directing the implementation of those plans to completion.

According to the Ministry of Industry and Trade, the costs of renewable energy, including wind and solar power, have decreased rapidly, increasing its competitiveness compared to traditional energy, thus creating conditions for stronger development.

The new requirements that the energy industry is facing are scientific planning and comprehensive evaluation for electricity projects.

The prime minister assigned the Ministry of Industry and Trade, the Commission for the Management of State Capital at Enterprises, and relevant agencies to coordinate agencies, units and corporations in implementing the projects to ensure their progress.

After Monday’s meeting, the Ministry of Industry and Trade shall finalize a draft mechanism for the Ministry of Justice to evaluate and submit to the prime minister as soon as possible.