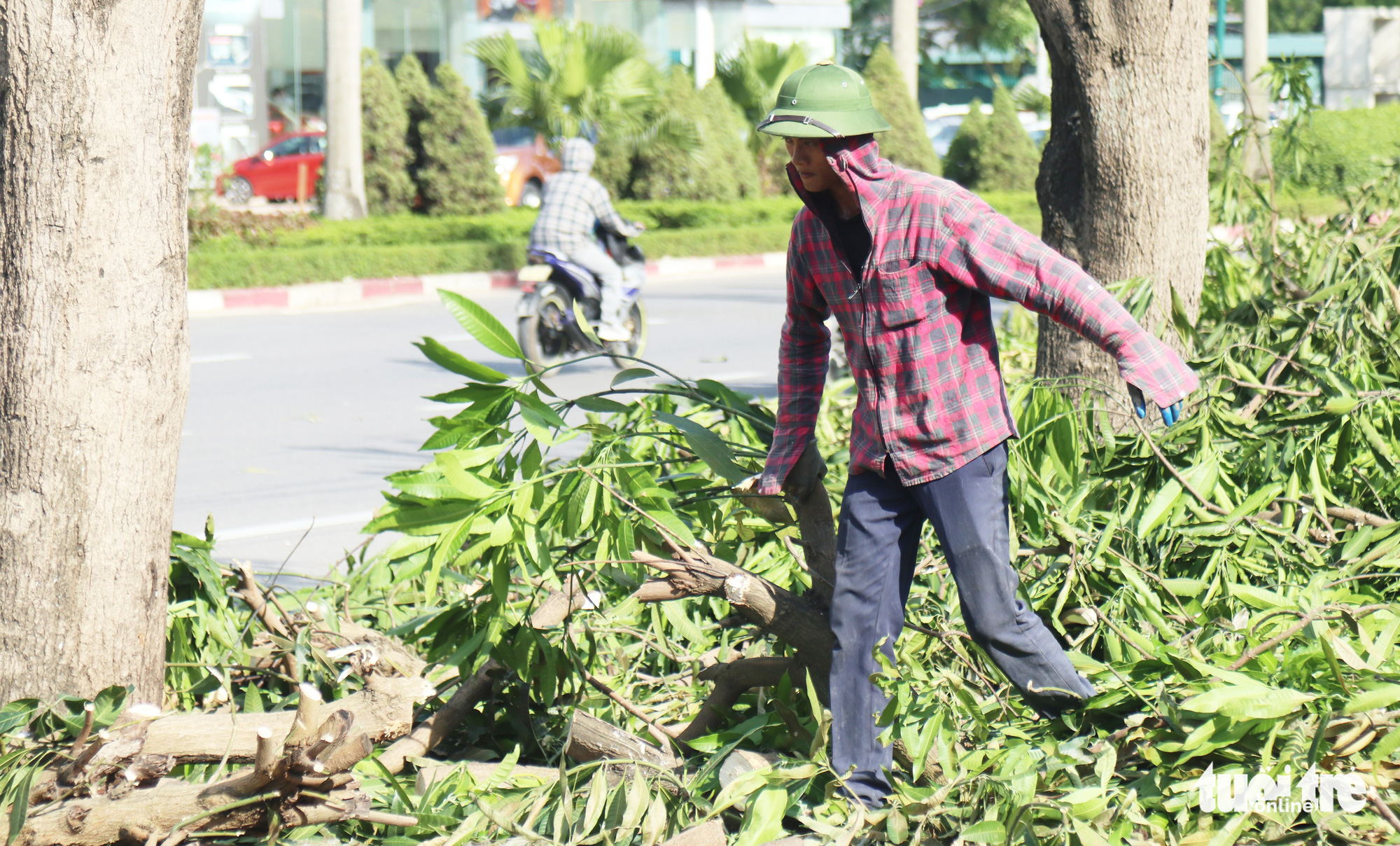 The authority’s decision to substantially thin out the tree lines on urban streets has disappointed citizens of Vinh City, the capital of the north-central Vietnamese province of Nghe An.

Over the last few days, Vinh citizens have seen the section of Le Nin Avenue that connects Vinh International Airport to Hung Dung Ward stripped of its cooling shade as roadside trees have been trimmed down to their core.

Workers from the state-authorized Vinh Green Tree & Park JSC have been working to prune large branches as well as uprooting mango trees on the airport link.

These trees were planted around ten years ago and are currently thriving with no signs of disease or decay.

The trees, once providing much-needed shade, are now bare and almost leafless.

Along the sidewalks, some trees have been uprooted and taken away to make space for electricians to install underground cable lines.

The urban dwellers of Vinh have long cherished the presence of the trees, which served as the 'green lungs' providing ventilation and shade during summer heatwaves.

Many citizens whom Tuoi Tre (Youth) newspaper spoke to expressed cynicism on the Vinh City leaders’ choice of trimming trees amid the peak of severe heatwaves with temperatures ranging from 37 to 40 degrees Celsius.

“We agree with the initiative of revamping the sidewalks to elevate the city’s outlook, but replacing flourishing trees at the height of oppressive heat only worsened the already stifling atmosphere,” said Pham Thi Duyen, a resident from Hung Dung Ward of Vinh City.

Nghe An Province leaders funneled VND675 billion (US$29.1 million) for an urban design project which planned for renovations on five major streets in downtown Vinh City.

The project would be carried out using both public and private funding, with the private sector contributing 30 percent of the total budget.

In response to Tuoi Tre, Phan Xuan Bao, director of Vinh Green Tree & Park JSC, said the city is carrying out renovation projects on its sewage system, including work on the pipeline beneath Le Nin Avenue.

The sewage system of Vinh City is obsolete and has failed to keep up with drainage requirements during the rainy season, causing flooding.

In order to meet the intended schedule, trees on the sidewalk of the renovation sites had to be relocated and will be replaced with new plants afterward.

“As someone who works to take care of and protect trees, it is a daunting task for us to relocate the trees under the scorching weather conditions, but we had no other choice,” Bao said.

Earlier in October 2019, Vinh City leaders replaced 300 shade-providing trees on the two streets of Ho Tung Mau and Nguyen Van Cu with new plants to prepare for the launch of a new pedestrian street during the 2020 New Year holiday.

Residents of the two streets are still baffled by the loss of the decades-old tree line.

According to Tuoi Tre’s observations, the new trees have not yet developed shade six months after their planting.