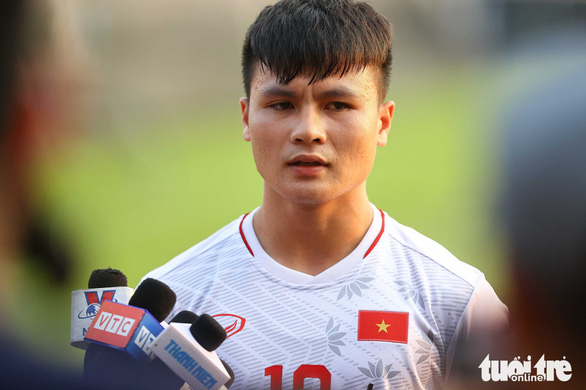 A recent trove of leaked private messages sent by Vietnam's star midfielder Nguyen Quang Hai has split public opinion on whether the footballer’s playboy lifestyle negates his right to privacy.

Screenshots of Hai’s private Facebook Messenger conversations were uploaded to his verified account on Tuesday, exposing his playboy lifestyle to his 2.2 million followers.

Many of the conversations detailed Hai’s romantic encounters with a series of women, online magazine Zing reported, sparking a backlash against the footballer from local netizens apparently appalled by his “morally bad lifestyle” and “lack of respect for women.”

On Tuesday evening, Hai issued an official statement regarding the situation, explaining that his account had been hacked and proclaiming the incident as a serious breach of his right to privacy.

“The unauthorized use and dissemination of other people's private information online constitute a serious violation of personal and legal rights,” Hai wrote in a Facebook post after deleting the screenshots.

Notably, he wrote that he is working with authorities on handling the issue but failed to comment on the authenticity of the messages.

Image of an influencer

Nguyen Quang Hai, 23, is an attacking midfielder on the Vietnamese national team as well as Hanoi FC squad, a club in Vietnam’s top-tier V-League 1.

In 2018, he placed 15th out of 24 finalists for the Best Footballer in Asia award presented by Fox Sports Asia and Titan Sports after a vote by a panel of sports journalists and football experts.

The following year he placed 17th.

Head coach of Vietnam’s national team Park Hang Seo has allowed Hai to play a major role in Vietnam’s success in many tournaments over the past few years on both the national team and the U23 squad.

The leaked messages have led many to condemn Hai as a womanizer.

Communications and entertainment industry insiders have said that public figures should be aware that their role is typically accompanied by a lack of personal privacy and thus they are responsible for carefully crafting and protecting their public image.

That public image is of particular importance to those with commercial endorsement deals.

“Stars and KOL [key opinion leaders] must sign contracts [with commercial brands] agreeing on lifestyle principles, behaviors, and ethics in order to preserve the brands' image,” one media professional said, adding that “clean” and beautiful images of influencers bring both economic and reputational benefits to themselves and the firms they represent.

Plenty of netizens also came to Hai’s defense following the scandal, stating that celebrities are, in fact, entitled to privacy, with many going as far as calling Hai a victim of privacy infringement.

The fact that an alleged hacker could take control of Hai’s Facebook account, which is verified and managed by a team of his managers, also seemed to be a concern for many who followed the leak.

Before Hai’s scandal, a number of Vietnamese celebrities suffered from incidents regarding their personal privacy.

One such example occurred last month when two women spread rumors that comedy star Tran Thanh was a narcotics user.

Another happened last December, when private videos recorded at the home of female singer Van Mai Huong were shared over the Internet.

Many suggested that there be more aggressive measures taken by the government to protect the privacy of all Internet users.