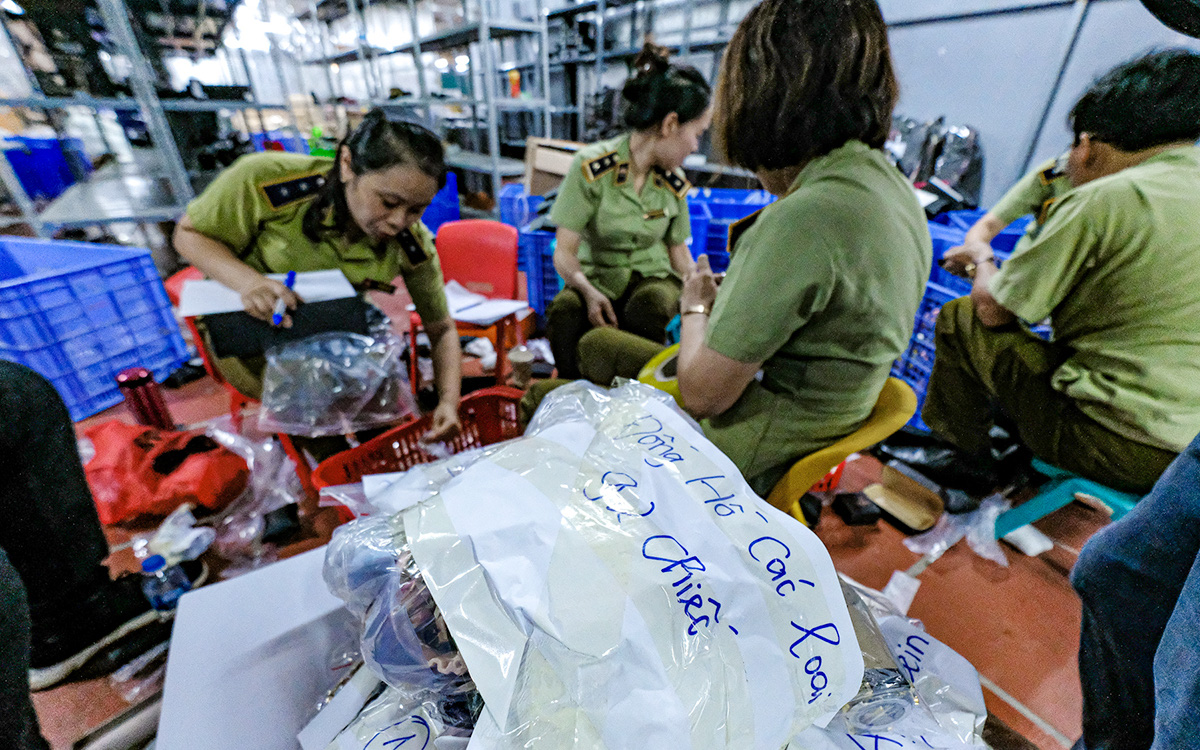 A ring in the northern Vietnamese province of Lao Cai earned over VND10 billion (US$429,100) in profit a month by smuggling counterfeit products from China and selling them across the Southeast Asian country via livestreams.

The ring was previously busted on Tuesday after officers raided its 10,000-square-meter warehouse in Lao Cai City, the capital of the namesake province.

The provincial market surveillance unit has been asked to make a detailed report on the case before transferring it to competent authorities for a comprehensive investigation.

Information acquired by Tuoi Tre (Youth) newspaper showed that Tran Thanh Phu, 28, began smuggling fashion and beauty products from Guangzhou, China and storing them at a warehouse at 145 Hoang Dieu Street in Lao Cai City in 2018.

Local residents were not aware of what was going on inside the facility as it was securely fenced off and guarded.

The warehouse was divided into two main areas. The first area was used to store all smuggled products, where they are sorted into different categories and moved into the second area, where products under different brands are kept in separate, organized sections.

The ring conducted its online business in the second area, with dozens of employees tasked with running livestreams using different Facebook accounts to advertise the products, while others are in charge of processing orders and packaging.

Trucks of delivery services then entered the warehouse to pick up the goods and deliver them to buyers across the country.

“The ring processes about 1,000 orders, each containing an average of two to three products, on a daily basis,” said Nguyen Ky Minh, an official from the Vietnam Directorate of Market Surveillance under the Ministry of Industry and Trade.

According to Do Duc Bac, head of the Lao Cai market surveillance unit, officers are currently unable further verify the case as Phu — the owner of the facility — has yet to present himself at the agency for a working session.

“Preliminary information indicated that the smuggled products were counterfeits of many famous brands, namely Nike, Adidas, LV, Chanel, Gucci, and others,” Bac elaborated.

The official admitted that the Lao Cai market surveillance unit was not aware of business operations inside the warehouse, citing local officers’ lack of experience in monitoring online activities.

Bac suggested that the Vietnam Directorate of Market Surveillance should establish a specialized division to prevent the online sale of smuggled and counterfeit goods.