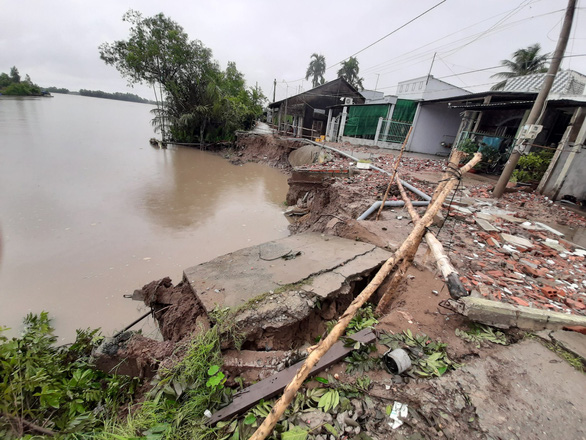 The strong winds, which lasted for less than half an hour each, appeared on the southern edge of storm Sinlaku’s circulation, according to the Can Tho Meteorological and Hydrological station in the namesake city.

Storm Sinlaku formed in the East Vietnam Sea last Saturday and made landfall in north-central Vietnam on Sunday afternoon, causing strong winds and heavy rains nationwide, before devolving into a tropical depression.

In Can Tho, 12 houses collapsed while 88 others lost their roofs or were otherwise damaged.

Thoi Lai, Ninh Kieu, O Mon, and Phong Dien are the districts with the most houses affected.

Heavy rains accompanied by the gusts also caused many trees, electric posts, and billboards to fall.

Nguyen Qui Ninh, chief of the office of the city’s Disaster Prevention and Rescue Command, said on Monday afternoon that VND200 million (US$8,700) had been advanced to support people affected by the storm in Thoi Lai and O Mon Districts.

In Soc Trang Province, more than 100 houses in Ke Sach, My Xuyen, and My Tu Districts as well as in Nga Nam Town and Soc Trang City were severely ravaged.

In addition, some localities along the Hau (Back) River, such as Song Phung and Phu Huu Communes in Long Phu District, also suffered from subsidence, according to the provincial Disaster Prevention and Rescue Command’s chief of office Pham Tan Dao.

“We are trying to support cleanup efforts, help people rebuild and at the same time relocate many households in areas at risk of land collapse to safer shelters,” Dao said.

According to the Can Tho Meteorological and Hydrological Station, bad weather will continue to affect the Mekong Delta region in the next ten days, especially from August 6 to 8, with heavy rains and gusts in the forecast.