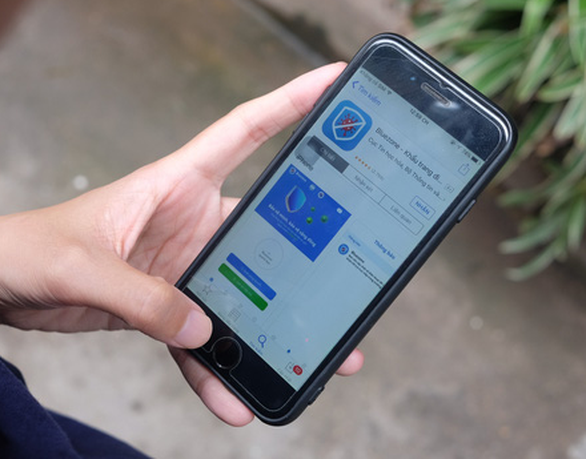 Bluezone, a mobile app commissioned by the Vietnamese government to assist in contact tracing during the novel coronavirus disease (COVID-19) pandemic, does not intrude on personal privacy or collect users’ data, according to Tran Viet Hai — the person in charge of the app project.

Hai told Tuoi Tre (Youth) newspaper that the app can identify recent contacts by the exchange of Bluetooth radio signals.

Each phone generates a random alphanumeric ID — which is shuffled regularly — that it broadcasts to nearby phones in a protocol known as Bluetooth 'handshakes.'

If two users are opening the app at the same time, their passing by each other will be calculated as one 'contact,' Hai explained.

“If they leave the application running in the background, it may take longer [for the encounter to be recorded], but not more than five minutes,” he said.

If the distance between the two smartphones with Bluezone installed is less than two meters, the users’ interaction will be categorized as 'close contact.' Otherwise, it will be classified as mere 'contact.'

If a user experiences symptoms or tests positive for COVID-19, they can trigger notifications to the phones they have recently been near.

Hai further clarified that the number of people a Bluezone user is exposed to and the number of 'contacts' counted by the app can be different, as several interactions between two same people are counted as separate 'contacts' rather than one.

By this logic, a user can see a high number of 'contacts' on the app although they have recently interacted with only one or two people, he noted.

Hai also asked people to make sure that the Bluetooth function on their smartphone is turned on to keep the app running properly.

Regarding Bluezone users’ privacy, Hai affirmed that the app’s development and operations team does not collect any user data.

According to him, Bluezone operates in a distributed application architecture, where data is stored on users’ devices rather than a developer server.

Users are therefore in complete control of whether they want to erase data collected by the Bluezone app stored on their device, Hai explained.

In the event that Bluezone’s system is attacked, hackers cannot have all the data of the users, he added.

The development of the Bluezone app is overseen by Vietnam’s Ministry of Information and Communications and Ministry of Health. It was introduced on April 18.

Minister of Information and Communications Nguyen Manh Hung previously pledged that the tracking app would not invade users’ privacy.

Over 12 million of people in Vietnam had downloaded the app as of last Saturday, according to the Ministry of Information and Communications.

The health ministry believes that at least 50 million active Bluezone users — out of Vietnam’s 76.8 million smartphone users — are needed for the app to have a meaningful impact.