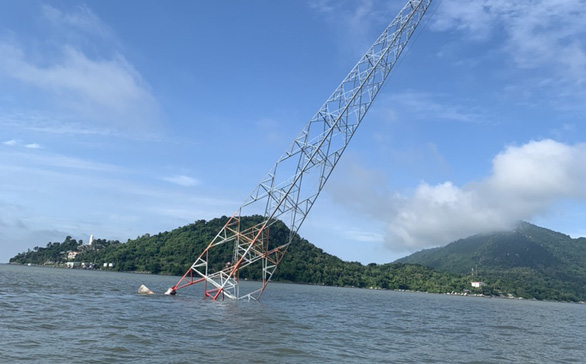 About 5,000 residents on Hon Tre Island off the southern Vietnamese province of Kien Giang lived with no power for 18 hours on Saturday after one transmission tower that is part of a sea-crossing power line was damaged in an alleged collision.

The accident occurred at transmission tower No. 25 at about 0:00 am Saturday, according to the People’s Committee of Kien Giang’s Kien Hai District, which administers Hon Tre Island.

The entire concrete foundation of the tower has been tilted, with the suspected cause being a collision with a large maritime vehicle.

As an immediate response, the People’s Committee of Kien Hai District requested the Kien Giang Power Company to urgently shut down the entire power line, which transmits electricity from the mainland to Hon Tre Island.

As a result, about 5,000 residents of more than 1,000 households on the island have been affected by the power cut.

According to a leader of the Kien Giang Power Company, this is considered a serious incident, and finding its cause and a thorough resolution could take some time.

As of Saturday afternoon, the power line has been temporarily reconnected to serve the needs of residents on the island, the Kien Giang Power Company's director Hua Thanh Nhan said.

Warning lights at night will also be installed around other sea crossing transmission towers, especially those near the shore that are prone to collisions with ships, according to Nhan.

"When controlling maritime vehicles near the high-voltage towers, people should be attentive to avoid dangerous collisions. It is very hard and expensive to overcome the consequences of such an incident," Nhan said.

Hon Tre was connected to the national power grid for the first time in 2015 when the sea-crossing electricity transmission line from the mainland to the island, with a total length of 13 kilometers, was inaugurated.

The line, worth VND69.5 billion (US$3 million), consists of 27 towers, including 25 built with a concrete foundation and steel pillars on the sea.