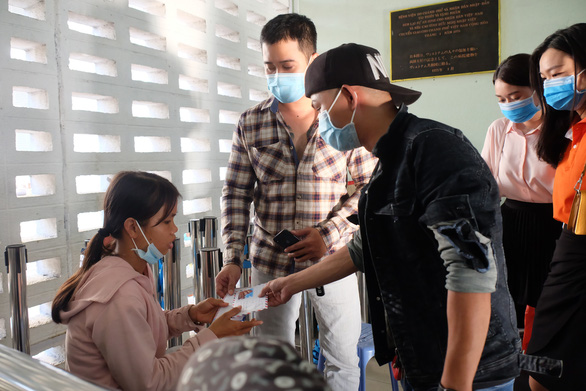 Many people have donated to help the family of a man from the southern Vietnamese province of Tay Ninh who was bitten by a king cobra as he tried to catch it to earn money for his children’s tuition.

Phan Van Tam, 38, was bitten by the venomous snake, which measured 2.5 meters long and weighed 4.6 kilograms, as he tried to catch it after finding it lurking in his home’s yard on Wednesday.

After receiving first aid at a hospital in Tay Ninh, he was transferred to Cho Ray Hospital in Ho Chi Minh City, where he remained in the intensive care unit as of Saturday.

According to Tam’s wife Bui Thi Ngoc Tuoi, doctors said all of his internal organs — including his kidneys and liver — were damaged by the snake’s venom.

“He has been in a coma and put on a ventilator. The doctor said his leg [which was bitten by the snake] was necrotic and might need to be amputated,” Tuoi told Tuoi Tre (Youth) newspaper on Friday afternoon.

Tuoi said that Tam tried to catch the king cobra in order to sell it to pay their children’s tuition.

The man previously suffered a broken leg from a traffic accident and has been unemployed since.

Both Tam and Tuoi work as day laborers to raise their two children.

Given the family’s financial difficulty, Tuoi has been borrowing money from their family members and relatives to cover Tam’s hospital fees.

After learning about Tam’s story, many people have come to Cho Ray Hospital to give donations to Tuoi, including Nguyen Do Truc Phuong, who managed to raise more than VND100 million (US$4,300) from the online community.

“Had it not been for the support from the kind donors, I would not have known how to save my husband’s life,” Tuoi said emotionally while expressing her gratitude to the supporters.