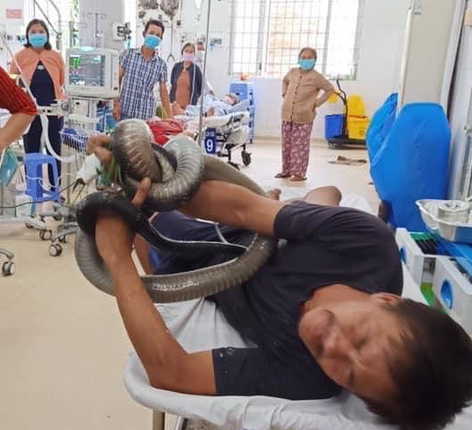 A 38-year-old man in the southern Vietnamese province of Tay Ninh carried a 4.6-kilogram king cobra with him to the hospital after being bitten by the animal.

Doctors at Cho Ray Hospital in Ho Chi Minh City confirmed on Wednesday that they are treating P.V.T., a resident in Tay Ninh Province, about 90 kilometers northwest of the southern metropolis.

According to family members, T. and his son spotted the large snake in their garden at around 7:00 am that same day.

T. attempted to catch the snake but ended up being bitten on the leg. He was able to grab the snake’s head.

Family members tied his thigh with elastic bands to prevent the venom from spreading and rushed him to a hospital in Tay Ninh.

T. remained conscious and held on tight to the snake’s head, while the animal was wrapping itself around his arm.

Doctors later removed the snake, which measured 2.5 meters long and weighed 4.6 kilograms, from the patient’s arm, cleaned his wound, bandaged his leg, and gave him pain relievers and antibiotics.

T. began having manifestations of cyanosis and difficulty breathing after about 30 minutes.

The patient was placed on a ventilator and transferred to Cho Ray Hospital in Ho Chi Minh City for further treatment.

Nguyen Ngoc Sang, a doctor at Cho Ray, told Tuoi Tre (Youth) newspaper that T. was brought to the infirmary on the afternoon of the same day.

The patient was treated with ten jars of snake venom antiserum and was eventually able to move his arms, legs, and eyes.

“Although T. is no longer in a critical state, we still need to closely monitor his cardiovascular conditions, as the bite of a king cobra can also harm the victim’s heart,” Sang stated.

The patient still requires support from a ventilator, he added.

A king cobra bite can lead to fatality if not promptly treated as it can cause paralysis of extremities and respiratory muscles, which lead to death from asphyxiation, as well as damaging the heart muscle, resulting in acute heart failure, according to the doctor.