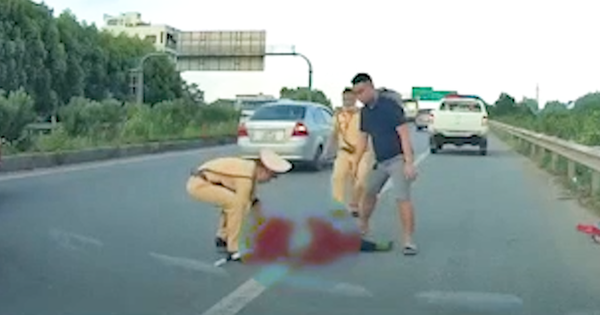 A police officer in the northern province of Bac Giang was pronounced dead after being knocked down by a pick-up truck that the officer was attempting to stop on suspicion of contraband trafficking.

Bac Giang police officers announced on Monday that a policeman serving the force had been killed on duty after being hit by a pick-up truck.

The incident occurred around 5:00 pm on Monday on the segment of the Hanoi-Bac Giang Highway crossing Yen Dung District.

The Economic Crimes and Traffic Police divisions under the Bac Giang Police Department were jointly operating a checkpoint there to check for violations.

Officers suspected the pick-up truck of contraband trafficking and ordered it to pull over as it approached the checkpoint.

He died before being transferred to the hospital.

A police officer is knocked down by a pick-up truck he was trying to pull over on the Hanoi-Bac Giang Highway in Bac Giang Province, Vietnam, September 14, 2020 in this supplied dashcam footage.

The victim was identified as N.V.M, a 23-year-old police officer from Luc Nam District of Bac Giang Province, who was working under the provincial mobile police force.

Promptly after the incident, relevant units were mobilized to the crime scene to investigate the case.

Police officers nabbed one suspect who was on the pick-up truck and brought him to the police station for further questioning.

Bac Giang police officers are putting the case through due procedures as stipulated by law.