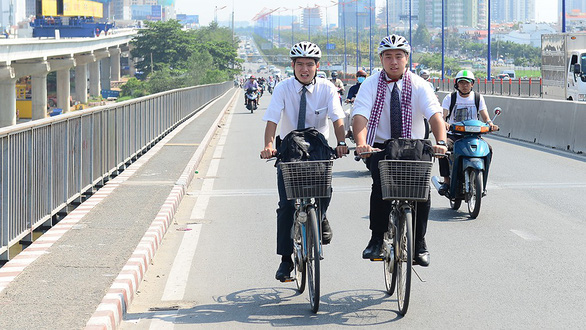 The Ho Chi Minh City Department of Transport has proposed trying out a public bicycle system that includes 43 stations along major streets in downtown areas.

The transport department said on Saturday it had drawn up a plan and collected feedback from competent agencies and citizens on a public bicycle system named Mobike.

The agency is asking the municipal People’s Committee to approve the execution of the bicycle network.

The plan will be funded by the private sector and aimed at creating a diverse selection of means of transportation in the inner city, as well as alleviating traffic jams and pollution.

Tri Nam Group JSC, investor of the project, is planning to carry out a pilot phase in 12 months, during which it will provide 388 bicycles at 43 stations along major streets in District 1, as well as Dien Bien Phu and Vo Thi Sau Streets in District 3, where bus-only lanes are expected to be established in the coming time.

Each station will have 10 to 20 bikes, each of which will be installed with smart locks and a GPS system.

In order to use the service, residents will need to download the Mobike app on their smartphones.

Proposed prices are VND5,000 (US$0.22) per 30 minutes. Tri Nam will provide tickets for 15-minute, 30-minute, and 60-minute sessions as well as daily, monthly, quarterly, and annually tickets.

During the first one to three months, people will be able to use the service free of charge for the first 15 minutes.

To prevent the bicycles from being stolen, users will be required to provide and verify their personal information.

Each bicycle will have a unique ID card, so that operators can monitor where each vehicle is and who is using it through a central software system.

The smart locks will also send an alarm signal when they are being forced open.

The bicycles will be designed with distinctive and irreplaceable features to reduce the risk of being sold in the market.