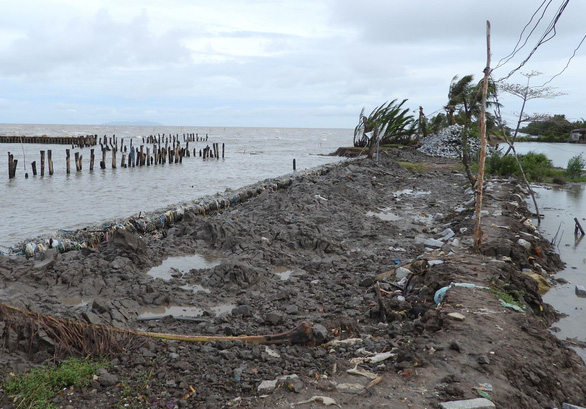 Authorities in a province in southern Vietnam on Wednesday announced an emergency situation as landslides hit five sections of the sea dykes along its western coast.

The total length of the five landslide-struck sections is over 5,800 meters.

He stressed the need to keep a close watch on the situation and to urgently draw up plans to protect critical locations, while asking for the placement of alert signs and the arrangement of forces for guarding eroding dyke routes.

Authorities of relevant localities must urgently evacuate people and properties out of those areas suffering serious erosion, the official underlined, adding communication campaigns must be organized to raise public awareness of the danger.

Officials have set aside nearly VND70 billion (US$3 million) for these tasks.

Ca Mau has been hit hard by erosion along sea and river dykes. Up to 80 percent of the 254 kilometers of sea dykes that run along both its eastern and western coasts have been eroded.

The sea has encroached on land by 20-25 meters each year, and even 50 meters in some sites, thus swallowing up protection forests.

The province has lost nearly 9,000 hectares of forest over the past decade, according to the Vietnam News Agency.

Since the beginning of this year, the provincial administration has accelerated projects to reinforce sea dykes ahead of the stormy season.