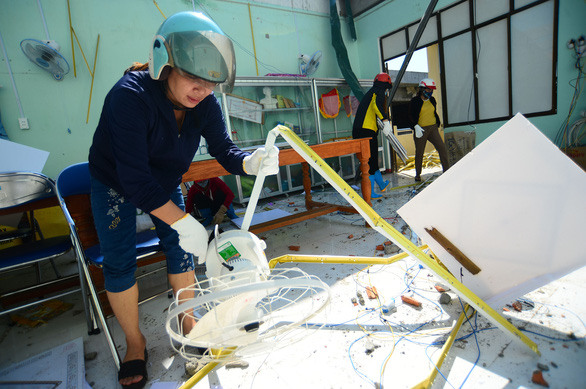 Sixty percent of schools in the central Vietnamese province of Quang Ngai had their roofs blown away after Typhoon Molave’s landfall, while uprooted trees and collapsed ceilings also destroyed their teaching facilities.

After Typhoon Molave unleashed torrential rains and gusts in the locality on Wednesday, residents saw clear sky and sunny daytime on Thursday.

As witnessed on Thursday morning, many schools in the province were found shattered and strewn with debris after the storm.

At Tinh Khe Kindergarten of Quang Ngai City, which is the capital of the namesake province, the metal roofing of classrooms was blown away, while two huge trees were uprooted.

Walls of their building also collapsed, while the school supplies and facilities inside were ruined.

“Prior to the storm, the school had barricaded our doors, verandas and trees, but the devastation from the typhoon still caused major damage,” said Bui Thi Thu Trang, principal of Tinh Khe Kindergarten.

Leaders of these schools are racing to clean up the damage and repairing facilities to resume classes as soon as possible.