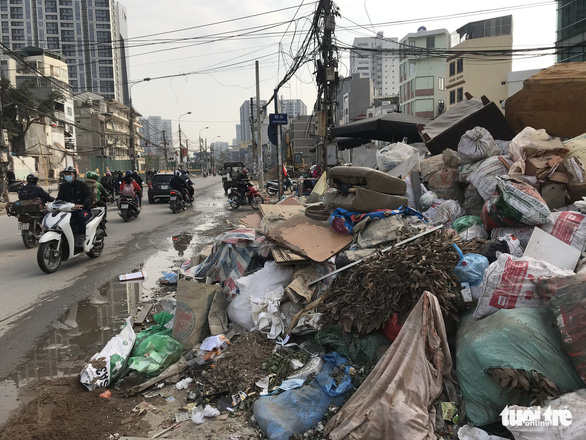 Streets of Hanoi’s Hai Ba Trung, Hoang Mai, Cau Giay and Thanh Tri Districts, to name a few, are being inundated with piles of domestic waste as the sanitation service in the locale has been defunct over the last few days due to a sanitation worker strike.

Heaps of domestic waste as well as construction debris have remained uncollected over the past few days, exuding a nauseating odor.

“I feel uncomfortable crossing this area," Cao Lang Phuong, a 73-year-old resident in the locale, complained.

"Trash is spilling into the street with a sickening smell.

"Congestion during rush hours on this street is partly caused by the excessive volume of trash.”

Other residents reported that large dumps of waste started to show up in the area when the Minh Khai Street extension project began.

“Even though I donned a face mask, the smell is still strong enough to force me to drive through this area as fast as possible,” local resident Le Minh Hieu remarked.

Answering Tuoi Tre (Youth) newspaper, a leader of an environment sanitation firm in Hanoi said they have acknowledged the issue, but have no official statement at the moment.

Earlier, the Hanoi People’s Committee directed the administrations of Tay Ho and Nam Tu Liem Districts to tackle the issue of environmental pollution in a written notice.

More specifically, the two districts were told to implement on-site evaluation to detect the root cause of the problem while working to probe the responsibility of service providers involved in the case.

As per a source of Tuoi Tre, a strike to protest late wage payment organized by sanitation workers of Nam Hanoi Group, one of the Vietnamese capital’s urban maintenance service providers, is the cause for the cessation of sanitation services in several areas of the city.